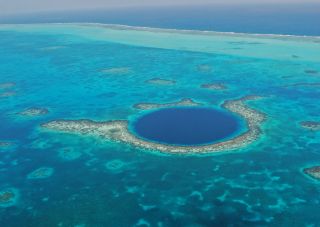 Explorers just mapped the depths of the Great Blue Hole off the coast of Belize.
(Image: © Aquatica Submarines)

Explorers reached the bottom of the Great Blue Hole, a sprawling sinkhole off the coast of Belize. With the expedition now complete, they are back to tell the tale of new mineral icicles, some unfortunate dead mollusks and plastic bottles.

The team of explorers –– including Fabien Cousteau, the grandson of filmmaker and explorer Jacques Cousteau who first made the sinkhole famous; Richard Branson, the founder of Virgin Group and co-founder of Ocean Unite; and Erika Bergman of Aquatica Submarines –– mapped out the depths of the 407-foot-deep (124 meters) hole using sound waves. [In Photos: Stunning Sinkholes]

When sound waves hit various objects and formations, they bounce off in distinct ways depending on the size and shape of the objects they hit. Using these sonar scans, the researchers created the first complete 3D sonar map of the sinkhole, which reaches 1,043 feet (318 m) across.

Amidst mapping out this massive geography, they also made some fascinating discoveries.

They discovered new stalactites, or mineral growths that look like icicles, that formed when the sea level was about 500 feet lower and the hole was just a dry cave, according to a blog post by Bergman. Through time, the cave eventually collapsed into the sinkhole of today, filled with stalactite-dotted caverns.

The explorers deemed an area of the hole the "conch graveyard," after observing hundreds of dead conch or mollusks that had seemingly fallen into the hole, couldn't get back out and eventually ran out of oxygen and died, Bergman wrote.

They found tiny tracks where the conchs had tried to backtrack up the hill, and tiny slide marks where they seemingly slid back down. Though a sad marine tale, the sheer number of conch shells they found indicates that the conch population is probably healthy, she wrote.

Their findings will be further detailed in an upcoming documentary by INE Entertainment that is planned for release in the spring.

"The real monsters facing the ocean are climate change and plastic," Branson wrote in a separate blog post, referring to the team's discovery of plastic bottles at the bottom of the hole.