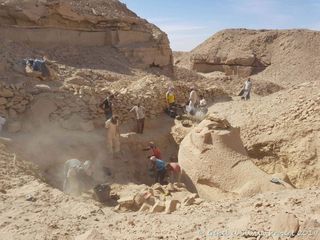 Workers dig a trench to excavate a large stone "criosphinx" (a sphinx with a ram's head) from quarry rubble at the Nile-side side of Gebel el-Silsila.
(Image: © © The Gebel el-Silsila Project 2019)

A ram-headed sphinx carved from sandstone more than 3,000 years ago has been found in Egypt.

Digging at the ancient quarry site of Gebel el-Silsila near Aswan, Egypt, archaeologists and workers unearthed the 11.5-foot-tall (3.5 meters) sphinx from a deep pit of quarry debris dumped there during the Roman era. The sphinx was sitting in an ancient carving workshop, where the team also found hundreds of stone fragments holding hieroglyphs and a carving of a coiled-up cobra that once crowned the sphinx.

The statue's presence at the quarry is something of a mystery, but it might have been a canceled order, said Maria Nilsson, an archaeologist at Lund University in Sweden and the director of the Gebel el-Silsila excavation. The evidence suggests that the sphinx was carved around the end of the reign of pharaoh Amenhotep III (King Tut's grandfather), Nilsson told Live Science. When the pharaoh died, the sculptures he commissioned might have been abandoned. [See Photos of the Ram-Headed Sphinx at Gebel el-Silsila]

The Gebel el-Silsila site sits along the banks of the Nile. The site was once a quarry, but recent excavations have revealed that it was also home for the quarry workers and their families. Nilsson and assistant project director John Ward have found a necropolis for men, women and children onsite. They've also found carved statues of well-off officials and an unlooted tomb full of a watery soup of human remains.

The newly unearthed sphinx is a criosphinx, or a sphinx with a ram head. (The full term for the more famous person-headed sphinxes found in Egypt is "androsphinx.") The broken top of the sphinx's head has been sticking out of the rubble that covered it since antiquity, Ward said. Beginning last year, workers on the dig excavated tons of rubble to reveal the entire statue all the way to its base, or plinth.

At the base of the statue, the archaeology team found the broken carved cobra, known as a uraeus, which was a symbol of royalty. They also found a "baby sphinx" — a small sphinx that an apprentice might have carved for practice. Surrounding the statues, Ward said, were tiny iron shavings from chisels and very fine sandstone chips, left behind by artisans carving 3,370 years ago.

Near the sphinx, the team found hundreds of fragments from a collapsed "naos," or shrine, of Amenhotep III. This pharaoh, the son of Thutmose IV, ruled Egypt from around 1390 B.C. to around 1350 B.C., during the New Kingdom era. A large stone fragment with text written in red ochre dating back to the opening of the quarry was found among the remnants of the structure; epigraphers are working to translate it, Ward said.

The massive sphinx would have been carved from a sandstone block weighing 10 metric tons (22,046 pounds), Ward said. It looks like an unfinished version of sphinxes found at the Khonsu Temple at Karnak, a site of ruins not far from Luxor. There is no obvious reason that the sphinx was abandoned at the quarry, Nilsson said. It does have a thin crack along its front, but the damage is unlikely to be bad enough to ruin such a large statue, she said. It's possible that when Amenhotep III died and his son took the throne, the old pharaoh's work projects were halted.

"One of the aspects that we are considering is whether or not it was left because of the change in rulership," Nilsson said.

The discovery was documented by a National Geographic film crew and is featured in Episode 5 of the series "The Lost Treasures of Egypt." Footage from the discovery will also be shown on the show "Secrets of Egypt's Valley of the Kings," on Channel 4 in the UK in March.

A huge amount of work remains to excavate the quarry rubble around the new sphinx, Ward said. The rubble is nearly 12 feet (3.5 m) thick over the layer that dates to the statue's creation.

"We've got an immense task ahead of us to clean all of this tonnage of quarry spoil to reveal all of this New Kingdom layer," Ward said.