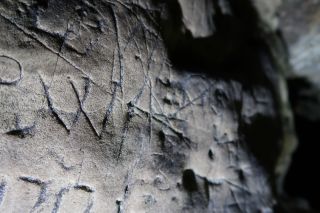 This mark, which may reference the Virgin Mary, is intended to keep away evil spirits.
(Image: © © Creswell Heritage Trust )

There's a cave in England where, during the last ice age, ancient people carved images of their world into the walls. Those renderings of bison, birds and reindeer are the only known examples of ice age rock art in Britain. But those same caves, Creswell Crags, were also the site of a more recent form of rock carving: witches' marks.

A pair of "enthusiasts" from the U.K. underground-exploration group Subterranea Britannica spotted the marks during a cave tour.

"These witch marks were in plain sight all the time," John Charlesworth, tour leader at the time of the discovery, said in a statement. "After 17 years at Creswell Crags, it makes me wonder what else it has to surprise us." [What's Witchcraft? 6 Misconceptions About Wiccans]

Witches' marks, according to the statement, were used to ward off evil spirits between the medieval period and the 19th century. They were most commonly carved into homes and churches. The marks often included Roman letters, which are deeply out of place amid cave carvings (at least 14,000 years old) created millenia before Romans occupied the British Isles.

One common sign seen in the carvings consists of two overlapping V's, which might refer to Mary "Virgin of Virgins," according to the statement.

Researchers still aren't sure precisely when the marks were made, by whom or for what reason. But those are questions the investigators will likely seek to answer as they study the designs.