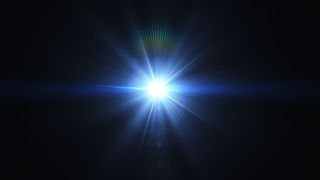 The Russian navy claims that it has armed two of its warships with a strobe-light-like weapon that can cause hallucinations, disorientation and nausea, according to news reports.

The weapon is said to serve as a sort of protective shield, firing a flashing light beam that hinders a target's eyesight, making it difficult for that person to aim, The Hill reported earlier this month. But the shield would also work like a weapon, causing neurological symptoms in its targets, according to Russian state news agency RIA Novosti.

Half of the volunteers who claim that they tested the shield weapon say that they also experienced visual disturbances when the weapon was "fired" at them, and 20 percent said they experienced hallucinations such as spots of light in their vision, according to RIA Novosti. (However, it's not clear how many volunteers were involved.) [Here's What We Know About Russia's Hypersonic Waverider Weapon]

Of course, the details about this supposed weapon are elusive, and Live Science cannot confirm its existence. But could such a weapon — namely, one that could use light to cause disorientation and other symptoms — even exist?

"Impairing vision with lights is not complicated or implausible," said Jonathan Winawer, an assistant professor of psychology and neural science at New York University. A bright light, like one from an oncoming car, makes it difficult for a person to see, and flickering lights can be disorienting. "Similarly, walking out of a darkened movie theater into the sunlight is temporarily blinding," Winawer told Live Science.

Hallucinations, or perceiving that something is present when it's not, can also be a common side effect of flickering lights.

It "would not be surprising if people were to see temporary afterimages after being exposed to bright flickering lights," said Christopher Honey, an assistant professor in the department of psychological and brain sciences at Johns Hopkins University.

In fact, such effects are commonly used in optical illusions. For example, in one popular optical illusion, staring at a dot for 30 seconds and then looking at a white wall may cause a person to see an image that's not there. Some of these illusions are "strengthened if they are presented with an on/off flicker," Honey told Live Science. But typically, these effects are induced when a person looks at something that's directly in front of them — for example, when it's on a screen or sheet of paper — that takes up a sizeable portion of the person's visual field. For the alleged shield weapon to cause similar effects from far away, it would need to "be exceptionally bright," Honey said.

All of this is to say that the visual effects induced by lights are common experiences. But flickering lights causing “crippling” symptoms like vertigo and other neurological effects is "much, much less common," Honey said.

Those feelings — of dizziness, vertigo, disorientation — occur in people who have a condition called "photosensitivity."

Some reports had suggested that photosensitivity affects up to 9 percent of the general population, but more recent research suggests its much rarer than that — with less than 1 percent of people showing unusual brain responses to flickering lights. So, it's difficult to reconcile those findings with claims that "half" the people who say they have tested the weapon experienced these symptoms, he added.

"The real problem in addressing [reports about this weapon] is there are so few details about what exactly happened," Honey said. "This could range anywhere from somebody had a bright flashing light to somebody spent a decade carefully designing the optimal disturbing, visually challenging stimulus."