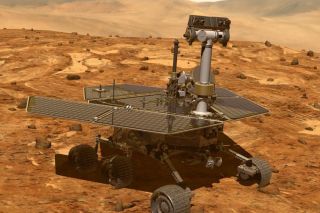 Artist's illustration of NASA's Opportunity on the surface of Mars, which touched down on the Red Planet in January 2004.
(Image: © NASA/JPL)

The Mars rover Opportunity has died, NASA announced yesterday (Feb. 13). A layer of dust likely coated its solar panels, preventing it from juicing itself up after a 2018 sky-blackening dust storm on the Red Planet.

But why couldn't NASA launch a rescue mission to get it working again? After all, Opportunity wasn't the first rover to get to Mars, and it won't be the last. It's just been the hardiest. In its stunning 14-plus years of travel, enabled by Martian winds that periodically cleaned off its solar panels, it has covered an impressive 28 miles (40 kilometers) on the planet.

The most obvious candidate to rescue Opportunity is the Curiosity rover, Opportunity's bigger, nuclear-powered younger sibling. Why not take some time out of Curiosity's work, and send it to see what's wrong with Opportunity and if it might be fixed? [Voyager to Mars Rover: NASA's 10 Greatest Innovations]

The first problem, unfortunately, is distance. According to NASA's Mars map, the Curiosity and Opportunity sites are about 5,200 miles (8,400 km) apart from one another. Curiosity's a bit swifter-footed than Opportunity, but even so, the young sprite would just take way too long to cover that terrain. To navigate the Martian terrain, these rovers require constant guidance from Earth Combined with the long delay between message transmission and receipt, even a trek of a few feet can take days.

The second problem is that Curiosity is an explorer, not a repair bot. It would be a monumental challenge to repurpose its onboard instruments to even clear dust off of Opportunity's solar panels. And there's no guarantee that's all that's gone wrong with the rover sitting silently in the Martian cold and darkness.

The final problem is time. Even if Curiosity could take some express train to Opportunity's location, Martian winter is setting in, and the conditions will likely compound any damage to Opportunity now that it's no longer able to keep itself warm.

So Opportunity is toast. But who knows, maybe humans on Mars will find it someday and manage to switch it back on.