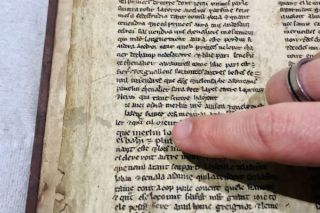 A close-up of one of the fragments that mentions Merlin.
(Image: © University of Bristol)

The librarian hadn't fallen under a magical spell, but he still felt enchanted when he unexpectedly discovered seven handwritten parchments detailing the legendary adventures of Merlin and King Arthur. For years, the documents had lain hidden at the University of Bristol in England.

The parchments were discovered in a book dating to the 16th century, Michael Richardson, the Bristol special collections librarian, said in a statement. He happened across the parchments while seeking materials for students who needed historical documents from medieval times.

Specifically, the parchments were found bound inside a four-volume edition of the writings of French scholar and reformer Jean Gerson (1363-1429). When Richardson recognized several Arthurian names, he contacted his colleagues to help decipher the text. [Image Gallery: Medieval Art Tells a Tale]

The team hopes to learn how the fragments came to be bound in the Gerson volumes. They also plan to fully translate the text from Old French to modern English in a new publication, which will explain the writing's history.

"These fragments of the story of Merlin are a wonderfully exciting find, which may have implications for the study not just of this text but also of other related and later texts that have shaped our modern understanding of the Arthurian legend," Leah Tether, president of the British branch of the International Arthurian Society and a reader in medieval literature at the University of Bristol, said in the statement.

She noted that these seven fragments are part of an Old French sequence of texts called the "Vulgate Cycle" or the "Lancelot-Grail Cycle," which date back to the 13th century. Sir Thomas Malory (1415-1471) likely used parts of this story cycle as a source for his "Le Morte d'Arthur," first published in 1485. Malory's text is the source for many of the modern retellings of the English Arthurian legend.

However, the stories in the Bristol fragments aren't exactly the same as traditional tellings of the King Arthur story. The fragments, which were printed in Strasbourg, France, between 1494 and 1502, contain subtle but significant differences, Tether said.

"Time and research will reveal what further secrets about the legends of Arthur, Merlin and the Holy Grail these fragments might hold," she said.

What's in the fragments

The surviving section is known as the "Estoire de Merlin" narrative. In this part of the story, Arthur, Merlin, Gawain and other knights, including King Ban and King Bohors, prepare for battle in Trèbes, France, against the fictional Frankish King Claudas and his followers.

Merlin carefully plans the attack. But the battle is rough, according to a long description in the story, and Arthur's forces falter until Merlin urges them to avoid cowardice and leads them back into the foray. Merlin even leads the charge with a fire-breathing dragon.

Finally, Arthur's forces prevail, and kings Arthur, Ban and Bohors, along with the other knights, take the Castle of Trèbes. The tale then follows their subsequent trials and escapades.

So far, the researchers have found only a few details in the newly discovered text that differ from the traditional tellings. For instance, King Claudas was wounded through the thighs in the traditional version, but the fragments don't say where he was wounded. This could lead to different interpretations of the overall text, as some scholars view a thigh wound as a metaphor for impotence or castration.

"There are many more differences, too, but because of the damage to the fragments, it will take time to decipher their contents properly, perhaps even requiring the use of infrared technology," Tether said. "We are all very excited to discover more about the fragments and what new information they might hold."