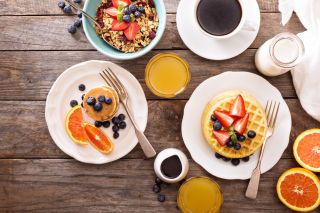 Breakfast may not be the "most important meal of the day" after all, at least for people trying to lose weight.

A new review study finds no strong evidence to support the ideas that eating breakfast helps with weight loss or that skipping breakfast promotes weight gain.

Rather, the review found that people who ate breakfast consumed more calories during the day and weighed slightly more than people who skipped the morning meal.

"This review questions the recommendation for breakfast consumption" to help with weight loss, the researchers, from Monash University in Melbourne, Australia, wrote in the Jan. 30 issue of the journal The BMJ.

However, the new review is far from the last word on breakfast. Indeed, the researchers cautioned that many of the studies included in the review had notable limitations. For example, many were conducted over a short period of time, and the study researchers often knew which participants were eating breakfast and which weren't — a design that could affect the interpretation of the study. [11 Surprising Things That Can Make Us Gain Weight]

Still, at the very least, the results suggest that caution is needed when recommending breakfast for people trying to lose weight, "as it could have the opposite effect," the researchers said.

They called for more long-term, high-quality studies to further examine the role of breakfast in weight control.

Some previous studies have suggested that people who eat breakfast are more likely to maintain a healthy weight than people who skip the morning meal. But these studies observed large populations over time, and it's possible that breakfast eaters in those studies tended to have other healthy lifestyle habits — like a healthier diet in general or a better exercise regime — that are responsible for the link.

In the new review, the researchers analyzed information from 13 previous studies in which participants were randomly assigned to either eat breakfast or skip breakfast. Some of the studies focused on the effect of breakfast consumption on weight change, while others focused on participants' total daily calorie intake. The shortest study lasted just 24 hours, while the longest study lasted 16 weeks.

Overall, the review found that people who ate breakfast consumed, on average, about 260 calories more per day than people who skipped breakfast.

In addition, people who ate breakfast weighted about 1 lb. (0.44 kilograms) more at the end of the study period (seven weeks, on average) than people who skipped breakfast.

What's more, researchers have thought that people who skip breakfast would feel hungrier later in the day and thus eat more. But the new review did not find evidence that breakfast skippers felt hungrier in the afternoon, based on an analysis of hunger hormones.

Dana Hunnes, a senior dietitian at the Ronald Reagan UCLA Medical Center in Los Angeles, who was not involved in the review, said that its conclusions don't appear strong enough to warrant recommending for or against skipping breakfast. Hunnes noted that the review found only a 1-lb.difference between breakfast eaters and breakfast skippers, and the studies included in the review were conducted for relatively short periods.

"I don't feel the findings are robust enough to recommend [skipping breakfast] as a weight-loss strategy for most people," Hunnes told Live Science.

That means that if you like to eat breakfast, Hunnes would not recommend changing your habits, in part because the review found such a small difference in weight between the two groups. Likewise, if you just don't like eating breakfast, you don't need to start, Hunnes said.

She added that she would like to see future studies on this topic that are conducted over a longer time, around six months to a year. And rather than asking people to report what they eat after the fact, future studies could use apps that allow people to quickly enter all the foods they are eating during the day, she said.