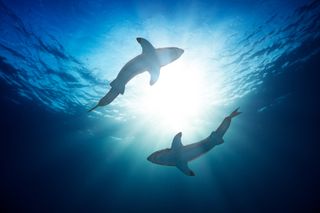 Believe it or not, 2018 wasn't all bad. At least the number of humans getting bitten by sharks went down!

In 2018, there were 66 documented unprovoked shark bites, down from 88 in 2017, according to a new report released today (Jan. 28) by the Florida Museum of Natural History’s International Shark Attack File database (yes, it’s real).

The report focused on unprovoked shark attacks, meaning those in which the human didn't, in some way, initiate a touch or other interaction with the shark. An additional 34 attacks were provoked, the report said. The data showed that while there were fewer documented bites last year, the number of deaths from shark bites stayed about the same. [On the Brink: A Gallery of Wild Sharks]

Every year, shark bites lead to about six deaths worldwide. In 2018, five people died from shark attacks, four of which were unprovoked.

The country with the largest number of unprovoked attacks — 32 confirmed — was the U.S., as is typical, according to the summary of the report. Within the U.S., the most attacks occured in Florida, which has been leading the pack for decades.

While it's tempting to come up with explanations for the decline in shark attacks, the summary said the researchers do not "assign significance to short-term trends, as annual fluctuations in shark-human interactions are to be expected."

Despite the recent decline, shark attacks will likely increase, the report said. The number of times humans and sharks interact is correlated by how many people, well… go into the water. And those numbers are increasing. "As the human population continues to expand and as interest in outdoor aquatic recreational activities increases, the incidence of shark attacks is expected to rise," the statement said.

But while interest in water sports is increasing, so are advances in beach safety, medical treatment and public awareness. Though getting bit by a shark is rare, the museum does offer tips for how to avoid such a scenario.

It's also important to note that many more sharks are killed by humans, than humans killed by sharks.

Millions of sharks and rays are killed in fisheries every year, the statement said. It's a "somber truth" that much of the world's shark populations are in decline because of overfishing and habitat loss, the researchers said. "There is a pressing need to conserve these animals and their associated habitats to ensure their sustainability in the long term."