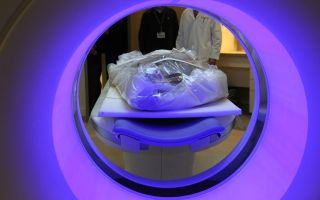 Did people suffer from heart disease in the 16th century? Scans of Greenland mummies hints that they did.
(Image: © Brigham and Women's Hospital)

Five mummies lay entombed in ice in Greenland for some 500 years, their flesh, muscles and even their blood vessels sealed off from the vagaries of decay. Now, scientists have analyzed the mummies to find that some of them had arteries that were coated with plaque, a sign of atherosclerosis.

Atherosclerosis — in which plaque buildup narrows arteries and restricts blood flow to the heart — is known in mummies elsewhere in the world, but this is the first evidence to emerge from Greenland, the researchers reported in a statement. [Gallery: Scanning Mummies for Heart Disease]

Plaque that builds up in arteries accumulates as a mixture of fatty deposits, cholesterol, calcium and waste material, according to the American Heart Association (AHA). Atherosclerosis is often associated with high-cholesterol diets that include foods such as beef, pork and high-fat dairy products.

The scientists discovered the heart-disease signs after running computed X-ray tomography (CT) scans on the 16th-century Greenland mummies — four Inuit adults and an Inuit child — as part of an international effort investigating heart disease in preindustrial and hunter-gatherer civilizations. The mummies were in the collection at Harvard University's Peabody Museum of Archaeology and Ethnology, according to the statement.

Researchers detected plaque in blood vessels in three of the mummies' chests, "such as the aorta or some arteries of the neck," said Dr. Ron Blankstein, associate director of the cardiovascular-imaging program at Brigham and Women's Hospital in Boston, where the scans were conducted.

Before this discovery, other mummies provided ample proof that ancient peoples experienced heart health issues. In 2011, researchers examined 44 Egyptian mummies that were 3,500 years old, and found 20 mummies that showed evidence of atherosclerosis. In three cases, the mummies' coronary arteries were liberally coated with plaque.

Another study from 2013 investigated CT scans of mummies from sites across three continents and spanning 4,000 years, showing that atherosclerosis was present in all populations, Live Science previously reported.

Even the famed Ötzi — a male ice-age mummy found in the Swiss Alps in 1991 and estimated to be 5,300 years old — showed evidence of cardiovascular plaque, with recent full-body scans revealing three calcifications near his heart.

However, researchers were surprised to find atherosclerosis in the Greenland mummies. Arterial plaque typically accumulates with age, and the adult mummies were estimated to be quite young, Blankstein said in the statement. What's more, their diet would have been primarily marine mammals and fish, and eating more fish — particularly fish that contain omega-3 fatty acids — is typically associated with heart health benefits, according to the AHA.

Even so, other factors could have led to arterial plaque buildup, such as a lifestyle that included regular exposure to cooking smoke in their homes, Blankstein said. Further research will help to uncover the cause of atherosclerosis in the Greenland mummies, he added.