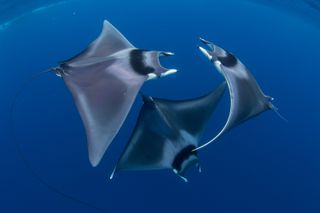 A graceful trio of giant devil rays spirals through the endless blue in the overall winner of the 2018 Ocean Art underwater photography competition.

Taken by nature photographer Duncan Murrell in Honda Bay off Palawan, in the Philippines, the shot captures two male spinetail devil rays (Mobula japonica) competing for the attentions of a single female.

"It's fair to say that only a handful of people in the world have ever seen that behavior," said Scott Gietler, a contest judge and the founder of Underwater Photography Guide, which runs the contest. [See the Amazing, Winning Underwater Photos]

Other category winners included a wide-angle image centered on the tail of a mother humpback whale, an eerie portrait of a blank-eyed spotted ratfish, and a dreamy shot of a brilliant pink sea slug suspended in a hammock of its eggs.

The winners of this year's contest were drawn from thousands of entries, Gietler told Live Science, with hundreds of stand-out shots among them. Photographers compete in a variety of categories, from macro to wide-angle and cold-water to reefscapes.

The Best in Show winner, however, drew the judges because of its rare subject, perfect composition and lighting, and behavior that couldn't be posed.

"It makes you want to get in the water," Gietler said.

Spinetail devil rays are a mysterious species, with little known about the rays' biology and habits, according to the International Union for Conservation of Nature. Their graceful bodies can grow up 6.8 feet (2.1 meters) in width, but no one knows how often they mate, how long they gestate, or at which age they reach maturity. That makes the winning photo of their courtship a rarity.

"I loved this shot from the very first time I set eyes on it sitting in my 'box room' in a cold and wet weary day in the U.K.," judge Martin Edge, the author of "The Underwater Photographer," said in a statement (Focal Press, 4th edition, 2010).

Among the marine mammals showcased were a trio of Atlantic spotted dolphins (Stenella frontalis) who playfully spiraled around photographer Eugene Kitsios near Bimini in the Bahamas, and a humpback whale (Megaptera novaeangliae) mother with her calf, dwarfing a nearby human diver. There were many humpback whale shots entered into the contest, Gietler said, but that one stood out for its beauty.

"From down there, everything seemed unreal," photographer François Baelen wrote in his description of that winning wide-angle image. "That huge tail centimeters away from me, the calf, my friend free diving symmetrically. I knew I would not get a shot like this one again."