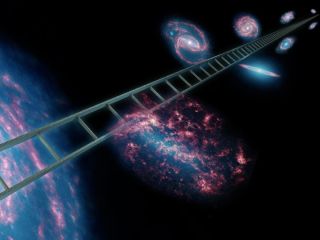 Scientists use a cosmic distance ladder to measure the expansion rate of the universe. The ladder, symbolically shown here, is a series of stars and other objects within galaxies that have known distances. By combining these distance measurements with the speeds at which objects are moving away from us, scientists can calculate that expansion rate.
(Image: © NASA/JPL-Caltech)

This year marks the 90th anniversary of a mind-boggling discovery: that the universe is expanding.

The discovery was spearheaded by Edwin Hubble, for whom the orbiting Hubble Space Telescope is named. As an astronomer at Mount Wilson Observatory in Los Angeles, Hubble had access to the most cutting-edge equipment of the day, particularly the 100-inch (2.5 meters) Hooker telescope. The telescope, built in 1917, was the largest on Earth until 1949.

Since 1919, Hubble had been discovering new galaxies from the observatory, according to the Carnegie Institution for Science. In 1923, he developed a method of measuring the distance between a far-flung galaxy and the Milky Way, which involved calculating the actual brightness of stars in another galaxy and then comparing that value with how bright they appeared from Earth. [11 Fascinating Facts About Our Milky Way Galaxy]

This work led to another revelation. According to the Carnegie Institution, Hubble also knew about the work of an earlier astronomer, Vesto Melvin Slipher, who had figured out that he could measure how fast a galaxy was moving toward or away from the Milky Way by looking for changes in the wavelengths of light coming from that galaxy. The measurement is called the Doppler shift, and the principle is the same as the pitch change that seems to happen as an ambulance siren approaches, blares by, and recedes, except with light instead of sound. In the case of light, wavelengths emitted by an object moving toward a stationary observer appear more frequent, and thus bluer. Wavelengths emitted by an receding object appear less frequent, and thus redder.

Armed with information about the distance of other galaxies and their Doppler shift, Hubble and his colleagues published a paper in 1929 that would change astronomy. The paper, "A Relation between Distance and Radial Velocity among Extra-Galactic Nebulae," demonstrated that the galaxies visible from the Milky Way all seemed to be speeding away. (On Jan. 17, 1929, the paper was "communicated" to the National Academy of Sciences.)

What Hubble and his co-authors had observed was the very expansion of the universe itself. To use a famous analogy, the galaxies are like raisins in the bread dough of the universe. As the dough rises, all of the raisins move farther apart, but they're all still stuck in the same dough. The discovery enabled the calculation of the age of the universe: about 13.7 billion years old.

Ninety years after the Hubble team reported its findings, scientists are still trying to understand how this expansion works. Last year, using the telescope named for Hubble, astronomers reported that the expansion is faster than expected — 73 kilometers per second per megaparsec, to be precise. A megaparsec is 3.3 million light-years, so this measurement means that for every 3.3 million light-years from Earth, a galaxy appears to be receding at 73 kilometers per second faster.

A few months later, the same researchers found that more distant reaches of the universe seem to be expanding less quickly, at 67 kilometers per second per megaparsec. The discrepancies suggest that something — maybe dark energy or dark matter — is influencing the universe's expansion in ways not yet understood.