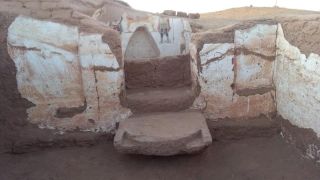 One of the structures contains a 20-step staircase made of sandstone that connects to the entrance of the tomb and the main hall. The hall is made of mud bricks and consists of a mostly destroyed ceiling and entrances to burial chambers. Inside, the archeologists discovered skeletons, clay lamps and pottery, according to a statement from the ministry. [Gallery: Amazing Egyptian Discoveries]

The second tomb, east of the first, is also made of mud bricks and contains a funerary shrine and sandstone offerings. Its walls are decorated with paintings that depict mummification.

Both tombs were discovered at the Ber El-Shaghala archeological site in Mout village at the Dakhla Oasis in central Egypt. Previous excavations at this site have led to the discovery of more than 10 sandstone tombs that date back to Greek times, according to the statement.