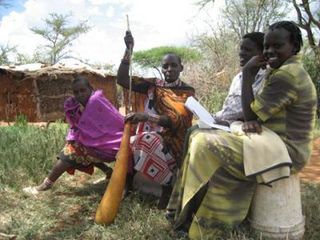 Some Maasai people make porridge out of cornmeal, water, milk and sugar.

Parents and physicians may rightfully encourage a well-balanced diet for their kids, but a new study shows that the Maasai nomads of Kenya in Eastern Africa remain surprisingly healthy despite a fairly one-sided and poor diet consisting mainly of cornmeal and milk.

The researchers suggest that nomads' bodies have adapted to stay healthy despite any nutritional deficiencies in their diet.

"We were surprised by these results," said Gerhard Jahreis, a nutritional physiologist at Friedrich Schiller University Jena in Germany. "They are proof for the enormous adaptability of the human organism."

European Travelers in Africa such as Gustav Adolf Fischer (1848-1886) and Englishman Joseph Thomson (1858-1895) spread stories that depicted the Massai as bloodthirsty people who consumed mainly meat, milk, blood and large amounts of a type of fermented milk that resembles yogurt.

But the fieldwork of Nadja Knoll, a nutrition researcher at Friedrich Schiller University Jena, contradicts those early claims.

Breakfast typically consists of sweetened milk tea and sometimes porridge made of cornmeal, water, milk and sugar. Lunch and dinner include milk and a polenta made from cornmeal and water.

Knoll cautioned that the Maasai may drink more of the yogurt during the short rainy season, because their livestock produce more milk — she conducted her study at the end of the dry season. It's possible that the yogurt may contain some pro-biotic benefits, she added. Pro-biotic bacteria marketed in many yogurts can supposedly help the body keep foreign invaders out of the gut, but some researchers remain skeptical.

More than 50 percent of the nomad diet consists of vegetarian foods, and sheep or goat meat only shows up occasionally. Cow meat represents an extremely rare treat.

"A cow will only be slaughtered for ritual festivities by the Maasai," Knoll explained. She carried out her study with researchers from Jomo Kenyatta University of Agriculture and Technology of Juja in Kenya.

Blood tests also showed that the Maasai had high amounts of omega-3 fatty acids in the cell walls of the red blood cells. These fatty acids are typically associated with fish. But it's possible the Maasai get some of their omega-3s from eating the meat of grass-fed herd animals, which differ from the corn-fed livestock typically raised in factory farms.

No details were available to explain just how the Maasai tribes might have adapted to their nutritional deficiencies, or how much time such adaptation would have required.