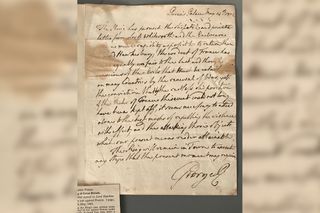 A letter penned by King George III of England on the eve of war has sold for more than $14,000 at auction.

The letter dates to May 14, 1803, in the midst of a decades-long series of wars between Britain and France. In the wake of the French Revolution, France had gone on a bit of a conquering spree, fearing the monarchies around it would attempt to crush the fledgling republic. Great Britain entered the fray in 1793. The fighting continued on and off until 1802, when Britain and France agreed to peace in the Treaty of Amiens. [10 Epic Battles that Changed History]

The eve of war

Barely shy of a year later, King George wrote the note that just sold at auction. Four days after he penned the message, the two countries were at war again. The handwritten note details the monarch's frustrations with the "restless disposition of the Ruler of France," Napoleon, who was busy trying to conquer much of the European continent — and also threatening some of Britain's colonial interests overseas.

"The conduct of France has been equally unfair to the last and though conscious of the Evils that must be entailed on many Countries by the renewal of War, yet the conviction that by the restless disposition of the Ruler of France could not long have been kept off, it seems necessary to attend alone to the best modes of repelling the violence with effect, and the attacking those objects which our present means render attainable," King George wrote.

The note was sent to the British Secretary of State, Lord Hawkesbury, and is unique because it shows the King's thinking on the eve of war, said Charles Ashton, the director of the auction house Cheffins, which brokered the sale of the note.

"This letter is a defining moment of history showing the King's intention to go to war with France and Napoleon," Ashton said in a statement.

The formal declaration of war came on May 18, 1803, launching the Napoleonic Wars. These would not end until 1815, when Napoleon famously met defeat at Waterloo. After that defeat, the famed general would be exiled to Saint Helena, an island in the South Atlantic, and Louis XVIII would be installed upon the French throne. [Photos: Archaeologists Excavate Battlefield from Napoleonic Wars]

It's not unusual to find short notes in private collections penned in King George III's hand, or papers signed by him, Ashton said in the statement, but it is unusual to find such a long and historically important document.

"The letter is unusual in that it is written by the King himself, as opposed to have been dictated to a scribe and then countersigned," Ashton said ahead of the sale. "This is what adds the value here."