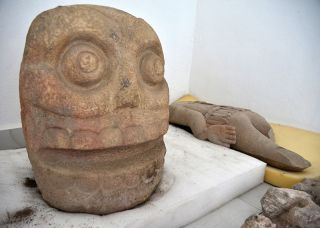 The discovery marks the first time researchers have found a cult center devoted to Xipe Tótec, or the "Flayed Lord," according to the announcement from Mexico's National Institute of Anthropology and History (INAH).

Altars, sculptures and other monumental features were excavated recently near the site of Ndachjian in the Mexican state of Puebla, where the cult temple was discovered. [25 Cultures That Practiced Human Sacrifice]

The Popoloca indigenous people likely built the complex between A.D. 1000 and 1260, archaeologist Noemí Castillo Tejero said in a statement. The area was later conquered by the Aztecs, the empire that still ruled over much of central Mexico when the Spanish conquistadors arrived.

Linked to fertility, war and agricultural renewal, Xipe Tótec was an important god in Aztec mythology. During the spring festival dedicated to him, known as Tlacaxipehualiztli, sacrificial victims were killed in gladiatorial combat or by being splayed out and shot with arrows. The dead were then flayed on another platform and their skin was worn by priests and other ritual participants for days. (According to some accounts, sometimes people would pledge to participate in the ceremony if Xipe Tótec cured their conditions like pimples, inflammation and eye diseases.)

The archaeologists believe the temple has features that match the descriptions of these rituals. They even identified holes where they speculate human skins might have been deposited after being worn.

The researchers discovered three monumental sculptures at the site that represent Xipe Tótec — one is a torso that stands 2.5 feet (80 centimeters) tall, and the other two depict skinned skulls, each measuring about 2.3 feet (70 cm) tall and weighing about 440 lbs. (200 kilograms).

"Sculpturally, it is a very beautiful piece," Castillo said of the torso, which shows Xipe Tótec wearing a feather skirt and what appears to be a flayed skin hanging off his body.

That torso is the "most compelling evidence of the association of this practice and related deity to a particular temple," said Susan Gillespie, a University of Florida archaeologist who wasn't involved in the excavation, according to the Associated Press.