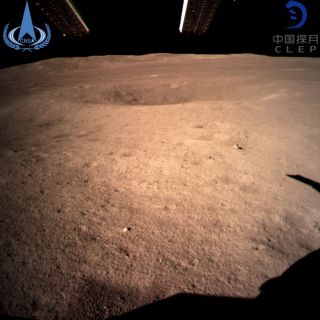 Humanity just planted its flag on the far side of the moon.

China's robotic Chang'e 4 mission touched down on the floor of the 115-mile-wide (186 kilometers) Von Kármán Crater Wednesday night (Jan. 2), pulling off the first-ever soft landing on the mysterious lunar far side.

Chang'e 4 will perform a variety of science work over the coming months, potentially helping scientists better understand the structure, formation and evolution of Earth's natural satellite. But the symbolic pull of the mission will resonate more with the masses: The list of unexplored locales in our solar system just got a little shorter. [China's Chang'e 4 Moon Far Side Mission in Pictures]

The epic touchdown — which took place at 9:26 p.m. EST (0226 GMT and 10:26 a.m. Beijing time on Jan. 3), according to Chinese space officials — followed closely on the heels of two big NASA spaceflight milestones. On Dec. 31, the OSIRIS-REx spacecraft entered orbit around the near-Earth asteroid Bennu, and the New Horizons probe zoomed past the distant object Ultima Thule just after midnight on Jan. 1.

"Congratulations to China's Chang'e 4 team for what appears to be a successful landing on the far side of the moon. This is a first for humanity and an impressive accomplishment!" NASA Administrator Jim Bridenstine said via Twitter Wednesday night, after word of the milestone began circulating on social media.

It takes the moon about the same amount of time to spin once on its axis as it does for the natural satellite to orbit the Earth: 27.3 days. Because of this "tidal locking," we only ever see one face of the moon, which we call the near side.

This familiar face has welcomed many visitors over the years, both robotic and human; all six of NASA's crewed Apollo missions to the lunar surface touched down on the near side. The far side is a much tougher target for surface exploration, because the moon's rocky bulk would block direct communication with any landers or rovers there. (And don't call it "the dark side"; the far side gets just as much sunlight as the near side.)

To deal with this issue, China launched a relay satellite called Queqiao in May 2018. Queqiao set up shop at the Earth-moon Lagrange point 2, a gravitationally stable spot beyond the moon from which the satellite can keep both Chang'e 4 and its home planet in sight.

The data flow through Queqiao will likely be extensive. Chang'e 4, which launched on Dec. 7 and entered lunar orbit 4.5 days later, boasts eight science instruments: four apiece on a stationary lander and a mobile rover.

Chang'e 4 will therefore be able to characterize its surroundings in great detail, probing the composition of the surface as well as the layered structure of the ground beneath the lander's feet. Such observations could help researchers better understand why the lunar near and far sides are so different, scientists have said. For example, dark volcanic plains called "maria" cover much of the near side but are nearly absent on the far side. (We do have good imagery of the far side from above, thanks to spacecraft such as NASA's Lunar Reconnaissance Orbiter.)

The mission should beam home some intriguing and dramatic imagery as well; Von Kármán Crater lies within the South Pole-Aitken (SPA) basin, one of the largest impact features in the solar system. The SPA basin measures a whopping 1,550 miles (2,500 km) from rim to rim and is about 7.5 miles (12 km) deep.

In addition, Chang'e 4 totes a biological experiment, which will track how silkworms, tomatoes and Arabidopsis plants grow and develop on the lunar surface. The mission will also make radio-astronomy observations, taking advantage of the exceptional peace and quiet of the far side. (Queqiao is also gathering astronomy data, using an instrument of its own called the Netherlands-China Low-Frequency Explorer.) [China's Moon Missions Explained (Infographic)]

Chang'e 4 is just the latest step in China's robotic lunar-exploration program, which is named after a moon goddess in Chinese mythology. The nation launched the Chang'e 1 and Chang'e 2 orbiters in 2007 and 2010, respectively, and pulled off a near-side landing with the Chang'e 3 mission in December 2013. (Chang'e 4 was originally designed as a backup to Chang'e 3, so the hardware of the two missions is similar.)

China also launched a return capsule on an eight-day trip around the moon in October 2014, a mission known as Chang'e 5T1. That was a test run for the Chang'e 5 sample-return effort, which could launch as early as this year.

China also has ambitions for crewed lunar missions, but its human-spaceflight program is focused more on Earth orbit in the short term. The nation aims to have a space station up and running there by the early 2020s.