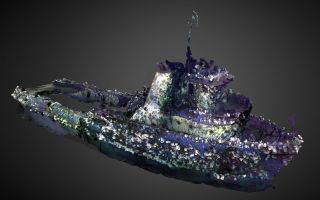 A ship that sank off the coast of California decades ago was recently reconstructed in remarkable detail. The 3D digital model even included hundreds of sponges that have collected on the ship's surface in the years since.

Named "American Heritage," the boat — a supply ship that once serviced oil platforms — foundered and sank in Santa Monica Bay on May 4, 1995, and for decades its precise location was unknown. Researchers with the Monterey Bay Aquarium Research Institute (MBARI) spotted a peculiar shape at that location in 2008. But it wasn't until May 2018 that MBARI scientists returned and mapped the site in greater detail, revealing what appeared to be a shipwreck on the ocean bottom. It measured 197 feet (60 meters) long and rested nearly 2,300 feet (700 m) below the surface, MBARI representatives wrote in a statement.

Even then, the identity of the shipwreck was uncertain. In September, yet another MBARI team revisited the location to conduct further investigations. They dispatched remotely operated vehicles (ROVs) and captured video of the battered, encrusted vessel. [The 20 Most Mysterious Shipwrecks Ever]

Though the ship's hull was densely covered with sponges, the scientists were able to spot letters spelling out its name on the bow, confirming that the shipwreck was the long-lost American Heritage, according to the statement.

And for one of the MBARI scientists who found American Heritage, the discovery was likely somewhat bittersweet.

Chief ROV pilot Knute Brekke had previously worked on board the ship, and he was on duty with the diving company American Pacific Marine — owners of American Heritage — the night the ship began taking on water and eventually sank.

"The American Heritage was an oil-field utility ship, shuttling crews and supplies to and from offshore oil rigs," MBARI spokesperson Kim Fulton-Bennett told Live Science in an email. The ship also supported divers and ROVs that were used to inspect, maintain and repair oil rigs and seafloor pipelines, Fulton-Bennett said.

"Knute worked as an ROV pilot, 'flying' these vehicles around the rigs. He does the same thing for MBARI now, except that we use ROVs for scientific research," Fulton-Bennett said.

During the September mission, Brekke and co-pilot Ben Erwin navigated the MBARI ROV named "Doc Ricketts" around the shipwreck for 3 hours. Using thousands of images captured by the ROV's video cameras, Erwin built a digital model of the sunken boat and shared an interactive version on the 3D modeling site Sketchfab.

The model is not complete, as floating ropes and poor visibility kept the pilots from getting too close to the wreck. Nevertheless, the reconstruction is detailed enough to show that American Heritage is now home to potentially thousands of sponges. Shipwrecks — accidental and deliberate — often transform into havens for diverse communities of marine life, Live Science previously reported.