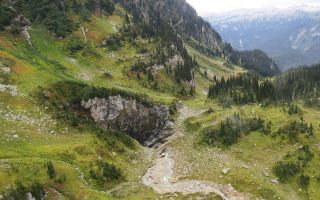 A helicopter team counting caribou in British Columbia, Canada, recently made an unexpected discovery during an aerial survey: Crewmembers spied an opening to a massive cave that had never been seen before and which might be the largest cave in the country.

Found in April in an alpine valley in Wells Gray Provincial Park, the cave's mouth gapes 328 feet (100 meters) across — if the Statue of Liberty were tipped over on its side, it would just about span the opening. The width of the cave is similarly impressive, measuring 197 feet (60 m), and the cave extends at least 443 feet (135 m) straight down, the Canadian Broadcasting Corporation (CBC) reported.

A biologist with the helicopter crew that spotted the sizable opening dubbed it "Sarlacc's Pit," after the lair that housed the predatory sarlacc in the "Star Wars" movie "Return of the Jedi," according to the CBC. The deep and wide cave was probably hollowed out by glaciers over tens of thousands of years, and it gradually became exposed to the sky after the glaciers receded. [Photos: Amazing Caves Around the World]

While researchers have yet to thoroughly explore the site, a preliminary investigation in September hinted that the cave was "of national significance," Canadian Geographic reported.

"The scale of this thing is just huge and about as big as they come in Canada," archaeological surveyor John Pollack, one of the researchers who explored the cave, told Canadian Geographic.

During that expedition, a breathtaking view of the vast cave was captured in aerial footage by geologist Catherine Hickson, an adjunct professor at the University of British Columbia in the Department of Earth, Ocean and Atmospheric Sciences, according to the National Post.

The video was shared to YouTube on Nov. 30 by Canadian Geographic. Seen from the air, the cave resembles a giant bite taken out of the hillside. Steep, rocky walls plunge downward, and a waterfall cascades more than 525 feet (60 m) over the edge.

After rushing water tumbles over the precipice into the cave's depths, it likely flows into a subterranean river that emerges above ground 6,890 feet (2,100 m) away, at an elevation that's about 1,640 feet (500 m) lower than the water's entry point, Pollack told Canadian Geographic. This hints at the length of the underground chambers in the cave, he explained.

While the unofficial name "Sarlacc Pit" certainly holds appeal for "Star Wars" fans, British Columbia province representatives will be working closely with First Nations people in the region to find out if there is an existing indigenous name for the cave, Canadian Geographic reported. Further investigation of the cave will take place in 2020, Hickson told CBC.

In Photos: Scotland's Cave of the Dead