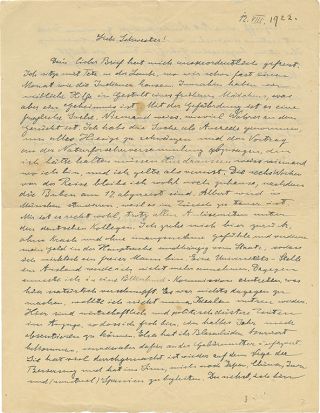 In a letter penned in 1922, Albert Einstein articulated his eerily accurate fears about the rise of nationalism, antisemitism and violence in his home country of Germany.
(Image: © Kedem Auction House)

A handwritten letter from Albert Einstein to his sister, Maja, has sold for $39,350 at an auction in Jerusalem. The letter, penned in 1922 from a secret location in northern Germany, reveals the physicist's prescient fears about the rise of nationalism and violence in his country a full decade before the Nazi party rose to power.

Einstein wrote the letter from hiding after the assassination of his friend Walther Rathenau, the German foreign minister and a fellow Jew, at the hands of right-wing extremists. Warned by police that he might be next, the prominent physicist left Berlin and fled to an undisclosed location in northern Germany. While the letter has no return address, scholars believe it was written while Einstein was staying in the port city of Kiel before embarking on a speaking tour in Asia, according to the Kedem auction house in Jerusalem, which sold the letter. [Beyond Relativity: Einstein's Lesser Known Work]

"Nobody knows where I am, and I'm believed to be missing," Einstein wrote in the letter. "I am doing quite well, in spite of all the anti-Semites among my German colleagues... Here are brewing economically and politically dark times, so I'm happy to be able to get away from everything for half a year."

According to Ze'ev Rosenkranz, the assistant director of the Einstein Papers Project at the California Institute of Technology, Einstein had warned about the rise of anti-Semitism in Germany before this letter, but was extremely rattled by the death of his friend.

"Einstein's initial reaction was one of panic and a desire to leave Germany for good," Rosenkranz said in a statement. "Within a week, he had changed his mind,"

While delivering lectures abroad later that year (and writing some pretty racist travel diaries), Einstein was notified that he had won the Nobel Prize in physics for his work studying the photoelectric effect. He ultimately returned to Germany until the Nazis rose to power in 1933 and passed anti-Semitic laws that removed Jews from public posts, including teaching positions.

Einstein was lecturing abroad when Hitler became chancellor. The physicist renounced his German citizenship and ultimately emigrated to America, where he lived until the end of his days.