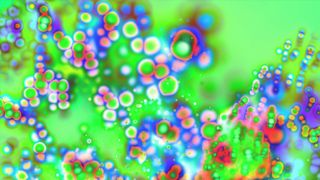 A lot of scientists think that major quantum effects like entanglement, in which particles separated by vast distances mysteriously link up their states, shouldn't work for living things. But a new paper argues that it already has — that scientists in 2016 have already created a sort of Schrödinger's cat — only with quantum-entangled bacteria.

Usually, we describe quantum physics as a set of rules that governs the behavior of extremely tiny things: light particles, atoms and other infinitesimally small objects. The larger world, at the bacterial scale (which is also our scale — the chaotic realm of life) isn't supposed to be anywhere near that weird.

That was what the physicist Erwin Schrödinger meant to say when he proposed his famous Schrödinger's cat thought experiment, as Jonathan O'Callaghan pointed out in Scientific American. In that thought experiment, a cat in a box would be exposed to a radioactive particle that had even odds of decaying or not. Until the box was opened, the poor cat would be both alive and dead at the same time, which seemed clearly absurd to Schrödinger. There's just something about the quantum world that doesn't seem to make sense in ours. [How Quantum Entanglement Works (Infographic)]

But scientists don't agree on where the boundary between the ordinary and the quantum world lies — or if it even exists at all. Chiara Marletto, a physicist at the University of Oxford and a co-author on the recent paper, which was published Oct. 10 in The Journal of Physics Communications, said that there's no reason to expect that there's a limit on the size of quantum effects.

"I'm interested in studying the border where quantum rules stop applying," she told Live Science. "Some people say that quantum theory is not a universal theory, so it does not apply to any object in the universe, but actually will at some point break down. My interest is to show that actually, that's not the case."

To that end, Marletto and her colleagues went back and looked at a paper published in 2017 in the journal Small that appeared to show some limited quantum effects in bacteria. They built a theoretical model of what might have really been going on in that University of Sheffield experiment, and it shows that those bacteria may have, in fact, become entangled with light particles.

Here's why that's such a radical idea:

Look at yourself, then look at the person next to you. You're physically separate beings, right?

But quantum mechanics tell us that this doesn't have to be the case. Particles, or collections of particles, can become bound up in one another, "entangled" so that their waveforms are entwined. Neither particle can be understood or described without also describing the other. And measuring a physical trait of one particle "collapses" the waveform of both particles. Separate the particles by thousands of miles, and you could still instantaneously learn the physical state of one of them by measuring only the other one.

According to current quantum theory, there's no limit to this effect. What works for a proton should work for an elephant. But in practice, bigger systems are far more difficult to entangle. And scientists have debated whether living things are simply too complex to entangle. You'd struggle to entangle two elephants for the same reason you'd struggle to teach those elephants to do pairs figure skating at an Olympic level: There's no specific law of nature saying that it's impossible, but most people would agree it's not possible.

And yet, in 2017, a team of researchers based at the University of Sheffield in England said they had created a state of what's known as quantum coupling in photosynthetic bacteria. They placed a few hundred bacteria in a tiny, mirrored room and bounced light around. (Based on the length of the mini room, only a certain wavelength of light persisted over time, known as the resonant frequency.) Over time, six of the bacteria appeared to develop a limited quantum connection to the light. So the resonant frequency of light inside the tiny room seemed to synchronize with the frequency at which electrons jumped in and out of position inside the bacteria's photosynthetic molecules. (For more on this effect, check out this link.)

Marletto said that her model shows that this effect likely involved more than just quantum coupling. There was likely something going on even weirder than what those experimentalists described, she said

The bacteria, she and her colleagues showed, likely became entangled with the light. What this means is that the equations used to define each of the waveforms — of both the light and the bacteria — become one equation. Neither is solvable without the other. (According to quantum mechanics, all objects can be described as both particle and wave, but practically speaking, in "large" objects like bacteria, the waveforms are impossible to see or measure.)

Like Schrödinger's proverbial cat in a box, the whole system seemed to exist in an uncertain netherworld: The light particles seem to have simultaneously both hit and missed the bacteria.

This doesn't prove the bacteria and the light were definitely entangled, however — there are other possible explanations that involve classical physics, and those haven't been ruled out yet, she said.

"What is missing in this experiment is the ability to confirm entanglement in a deeper way," she said.

Even more interesting, she said, is the question of whether the bacteria use the entanglement in some way that's useful to them, though answering that question would take much more experimental work.

"It is possible that natural selection has led the bacteria to take advantage of quantum effects," she said.