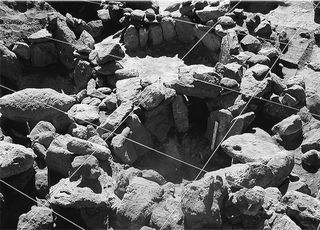 Ancient ceremonial complexes discovered in the world's driest desert suggest such places flourished thousands of years ago in what is now the Atacama Desert in Chile.

A team of archaeologists has concluded that two archaeological sites located less than 0.62 miles (1 kilometer) apart were both used for ceremonial purposes, wrote archaeology professors Catherine Perlès, from the Université Paris Nanterre; and Lautaro Nuñez, from the Universidad Católica del Norte in Chile.

To survive the harsh conditions of the arid Atacama Desert, the people who lived there made use of what scientists call eco-refuges — places that had enough water, animal and plant life to support humans, said Perlès and Nuñez in their paper. People living in nearby eco-refuges appear to have come together to build the two sites, with construction possibly being organized by religious leaders, said Perlès and Nuñez in a paper published online Oct. 26 in the journal Antiquity. [The 25 Most Mysterious Archaeological Finds on Earth]

The most impressive of the two sites flourished between 1200 B.C. and 500 B.C. Last excavated in 2015, the site includes massive stone monuments, infant burials and offerings of gold and other exotic materials from the Amazonian and the Pacific regions, Perlès and Nuñez wrote. They noted that the remains of 28 infants, some of whom were buried with rich grave goods, were also found there.

At two of the burials, archaeologists discovered elaborately decorated gold pendants; at another burial, they found a gold-plated wooden vulture head with inlaid green malachite eyes and crest, dating back to between 690 B.C. and 540 B.C., according to the paper.

"Numerous mortars and grinding slabs attest to the intense preparation of pigments, foodstuffs and beverages, as well as hallucinogens made from the seeds of cebil (Anadenanthera sp.) and maize (Zea mays), both imported from the lowlands of north-east Argentina," Perlès and Nuñez wrote.

The second site was last excavated in 1985 and, at the time, was believed to be a settlement. However, when Perlès and Nuñez re-evaluated the remains, they concluded that it was a ceremonial complex that was built 5,000 years ago, they wrote.

Their investigation revealed that none of the structures would have been used as houses and that the architecture is similar to that of the other Atacama site. "At both sites, the structures are built with large vertical and capping slabs, up to 1.5m [5 feet] in height," Perlès and Nuñez wrote. Additionally, "a high proportion of the mortars and grinding stones from both sites are associated with deposits of red pigment," which would have had a ceremonial use, they wrote.

While both researchers are convinced that the 5,000-year-old site was used for ceremonial purposes, exactly what ceremonies occurred is unclear. "This is a prehistoric site, we have no texts to tell us what kind of ceremonies were taking place," Perlès told Live Science.