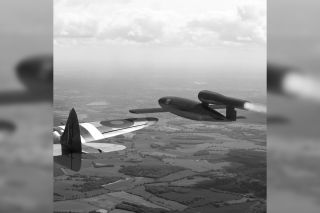 Archaeologists have discovered the exploded remains of a German V1 "flying bomb" that crashed in a forest in 1944 on the way to its target in London.

The dig has turned up several key metal parts from the unpiloted V1, a predecessor of today's guided cruise missiles. It was one of thousands of"retaliation weapons," or "Vergeltungswaffen,"launched by Nazi Germany in the last months of World War II.

Project leader Colin Welch told Live Science that almost 10,000 V1 flying bombs were fired mainly from launching ramps in German-controlled Holland against the southeast of England in 1944 and 1945. [See Photos of the V1 'Flying Bombs' of Nazy Germany]

The V1 excavated at Packing Wood near Ashford in Kent, England, last month was shot down over the Kent countryside before it reached London. Fighter-aircraft pilots had become adept at knocking down the flying bombs, and anti-aircraft artillery destroyed many V1s.

But many of the so-called doodlebugs, or buzz bombs, got through to their targets, killing more than 6,000 people in Britain and injuring tens of thousands more in a few months. The bombs also caused extensive damage and often set fire to buildings.

The V1 flying bomb had a wingspan of more than 16 feet (5 meters) and carried a high-explosive warhead weighing around 1,700 lbs. (850 kilograms), according to the Imperial War Museum in London, which has an undetonated V1 in its collections.

V1s were usually launched from a ramp and reached a top speed of 400 mph (640 km/h), driven by a pioneering pulse-jet engine that gave the "buzz bomb" its common English name. Welch said the noise made by the V1 was greatly feared across the southeast of England, especially if the sound cut off somewhere overhead, indicating that the weapon had gone into its final dive to its target.

"It was a distinctive, low sound, like a two-stroke engine … a rushing sound. You could hear the explosions from [the pulse-jet] as it was going over," Welch said. [The 22 Weirdest Military Weaons]

Each V1 had a guidance system powered by compressed air and could travel over a distance of up to 150 miles (240 km), far enough to hit targets in southeast England from western parts of the European continent, according to the Imperial War Museum.

German leader Adolf Hitler said that the V1s were used in response to devastating Allied bombing raids on German cities like Hamburg, where more than 35,000 people were killed in a few days in 1943, Welch explained.

Allied fighter pilots and anti-aircraft artillery learned to counter the V1 in a few months after it was first lauched. Welch's research has shown that the V1 excavated at Packing Wood was shot down on Aug. 6, 1944, by a Polish pilot, Flight Sergeant Józef Donocik, who was flying a U.S.-built P-51 Mustang fighter, Welch said.

But Nazi Germany soon attacked London with the next "retaliation weapon," also known as a v-weapon: the V2 rocket.

"The first V1 was launched on the 13th of June … Then, on Sept. 9, the British government said, 'We've beaten the V1 offensive,'" Welch said. "But within a couple of days, the first V2 rockets started to fall."

Colin Welch and his brother Sean run Research Resource, a private archaeological team that has carried out several wartime-related projects throughout Kent, the region of England south and east of London and nearest to the European continent.

The V2 rockets carried their high-explosive warheads on an arc that took the weapons more than 50 miles (80 km) above the Earth's surface at more than three times the speed of sound, making them impossible to shoot down or intercept at the time.

But because the V2 hit its target so fast, much of its explosive power was nearly wasted underground. "It wasn't the blast device that the Germans wanted it to be," Welch said.

Nonetheless, more than 1,100 V2 rockets were launched at London in the last months of the war, killing more than 2,000 people in Britain. Another 20,000 slave-workers were killed while making the dangerous rocketsat Peenemünde in the German Baltic.

After the war, several captured German V2 rockets were used to establish the U.S. military missile and civilian space programs, under the direction of the captured German rocket scientist Wernher von Braun.

Welch said the greatest challenge of the recent V1 and V2 excavations was conserving the metal parts that remained after the explosions.

Most of the steel used in their construction had eroded away in the wet and acidic soil, but many aluminum parts remained, he said. These included a V1 fuel compressor, parts of the V1 pulse jet and guidance system, and fuel "burner cups" from the V2 rocket.

Welch and his brother now hope to create an online museum of their v-weapon excavations, which would include 3D models of the recovered artifacts and historical information about the wartime V1 and V2 campaigns.

"This is our history, and it's got to be documented somehow in a responsible way," Welch said.