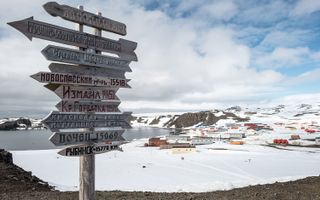 An elevated view of Bellingshausen Station and Frei Base on King George Island in Antarctica, where the stabbing allegedly took place.
(Image: © Alamy)

At a remote research station in Antarctica occupied by only 14 people, rising tensions between two Russian colleagues recently escalated into violence, ending with one man stabbing the other in the chest.

Savitsky stabbed Beloguzov with a knife; the injured Beloguzov was then evacuated to a hospital in Chile, where he was said to be in stable condition. A history of "strained relations" and long-standing hostility between the two men led to the knifing, according to 47News. [10 Mysterious Deaths and Disappearances That Still Puzzle Historians]

It has been widely reported that Savitsky "snapped" because Beloguzov repeatedly revealed the endings of the books that Savitsky was reading. However, it is unclear where this detail originated; an unnamed source told Russian news agency Interfax that tensions likely sparked from the men spending six months together in close quarters, but the source offered no further insights into what may have led Savitsky to pick up the knife and plunge it into Beloguzov's chest.

Researchers endure isolation and punishing conditions while conducting their work in Antarctica, though the time generally passes without dangerous incidents flaring up. However, there have been exceptions. In 1996, FBI agents visited Antarctica to investigate a fight that broke out at McMurdo Research Station, when one man attacked another with a hammer, The Spokesman reported that year.

And in 2000, an Australian astrophysicist named Rodney Marks died of methanol poisoning "under mysterious circumstances" while at the Amundsen–Scott South Pole Station; his death was investigated by authorities but was not labeled a homicide, according to the New Zealand Herald.

According to the terms of the Antarctic Treaty — drawn up in 1959 and now representing 53 nations — people who live and work at research bases in Antarctica who commit criminal offenses are subject to the jurisdiction of their home countries, the New York Times reported in 2016.

After the attack, Savitsky surrendered to the director of the research station. He traveled back to Russia, returning to St. Petersburg's Pulkovo International Airport on Oct. 20, where he was met by police officers. Two days later, officials with the Vasileostrovsky District Court in St. Petersburg charged Savitsky with attempted murder and sentenced him to house arrest until Dec. 8, 47News reported.