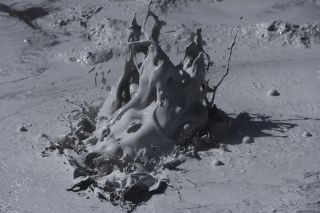 A mysterious, bubbling mud geyser is on the move in Southern California, flitting dangerously close to railroad tracks, Highway 111 and some very expensive optic cables, like a geologic poltergeist, according to news sources.

Even stranger, this puzzling geyser — dubbed the "Slow One" — is in the same neighborhood as the source of the so-called "Big One," the giant earthquake that is expected to shake things up where the North American and Pacific tectonic plates rub together to form the San Andreas Fault.

But despite the Slow One's unprecedented movement as of late, there's no evidence that this muddy geyser is an imminent precursor to an earthquake, geophysicist Ken Hudnut, with the U.S. Geological Survey, told the Los Angeles Times. In fact, the region has experienced less seismic activity in recent months than average, he said. [Gallery: Probing Geysers in Yellowstone and Chile]

Researchers have known about the Slow One, also called the Niland Geyser, since 1953. It formed when historic earthquakes caused deep cracks underground that allowed gases to move upward and escape at the surface, causing the bubbling mud pools, the Los Angeles Times reported. Unlike Yellowstone's Old Faithful, which has molten rock that superheats the circulating hot-spring water, the Niland Geyser is heated by bubbling carbon dioxide and registers at about 80 degrees Fahrenheit (nearly 27 degrees Celsius).

After not moving for decades, the geyser caught the attention of scientists when it began moving around over the past few years, David Lynch, a geophysicist, told the Los Angeles Times. Then, over the past six months, the geyser went on an erratic tour, first moving 60 feet (18 meters) over a few months and then a whopping 60 feet in one day, officials reported in Imperial County, where the muddy spring is located.

The geyser's latest move is threatening the region's infrastructure, including a Union Pacific freight railroad track going to Yuma, Arizona; a petroleum pipeline owned by the energy company Kinder Morgan; a line of fiber-optic telecommunications lines owned by Verizon; and a section of Highway 111, which connects Interstate 10 to the California-Mexico border, the Los Angeles Times reported.

So far, attempts to halt the geyser have not worked. For instance, officials tried draining some of the moving spring's water. And Union Pacific built a 100-foot-long (30 m) underground wall out of boulders and steel that extends more than 75 feet (23 m) deep as a measure to protect the railroad tracks.

But Mother Nature simply shrugged its shoulders. In October, the bubbling mud slipped under the wall, creeping even closer to the railway. And the muddy spring shows no signs of letting up; over the past 10 years, the rotten-egg-smelling, muddy spring has moved more than 240 feet (73 m) from its old location. So far, the mud spring has carved an approximately 24,000-square-foot (2,230-square-m) basin that's about 18 feet deep and 75 feet wide (5 by 23 m), according to research by Lynch and his colleagues.

In the meantime, Union Pacific has taken precautions by building temporary tracks on more-stable land and lowering the speed limit for trains in the area, the Los Angeles Times said. The California Department of Transportation said it will shut down part of Highway 111 if the gurgling mud gets too close for comfort.

For now, the spring is acting like a moving sinkhole, with mud about 40 feet (12 m) deep. As it moves through the region's mudstone (a soft, sedimentary rock), it leaves behind a sunken trail, much like the glossy path left behind a moving snail.

The public is advised to steer clear of this roving, bubbling mess. Toxic gases and a lack of oxygen could suffocate any victim who falls in it within minutes, Lynch said. But the carbon dioxide dissipates within a few feet of the spring, so scientists and other officials have stayed safe so far.

"It's a quirky thing," said Lynch, who has been consulting with Union Pacific since May. "If there was no railroad nearby, you wouldn't even know about it. This would just be something out there chewing out the desert."