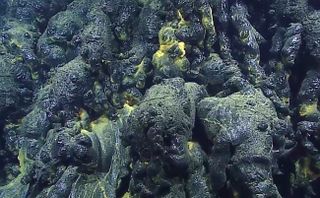 Lava that hits chilly seawater and cools quickly doesn't have time to crystallize and so forms a type of glassy lava.
(Image: © Oregon State University)

In December 2015, deep-sea researchers discovered a garden of glass on the bottom of the Pacific Ocean. Like a nightmarish Dale Chihuly exhibit, black tendrils of rapidly cooled lava poured out of an undersea volcano and hung frozen in the dark gallery of the Pacific, unable to fully crystallize in the cold water. The pillowy lava formations stretched out for 4.5 miles (7.3 kilometers), carpeting the floor of a trench nearly 3 miles (4.5 km) below the water's surface.

It was an exciting find, not only because of the spectacular visuals, but also because the glassy lava formations appeared relatively fresh. In fact, according to a new study published Tuesday (Oct. 23) in the journal Frontiers in Earth Science, the eruption occurred only months before the site's discovery — making this garden of glass in the Pacific Ocean the deepest-known volcanic eruption on Earth. [The 11 Biggest Volcanic Eruptions in History]

"We know that most of the world's volcanic activity actually takes place in the ocean, but most of it goes undetected and unseen," lead study author Bill Chadwick, a marine geologist at Oregon State University and the National Oceanic and Atmospheric Administration's Pacific Marine Environmental Laboratory, said in a statement. "Many of these areas are deep and don't leave any clues on the surface. That makes submarine eruptions very elusive."

Luckily, advances in marine exploration technology are making finds like this one ever more common. According to Chadwick, scientists have discovered evidence of about 40 undersea eruptions in the past 30 years. Before 1990, they had detected none.

Chadwick and his colleagues discovered this super-deep volcano while they were investigating thermal vents in the Mariana Trough — a crescent of volcanism, not far from the Mariana Trench, where the Pacific tectonic plate subducts beneath the Philippine Sea plate southeast of Japan.

An autonomous underwater vehicle named Sentry caught first sight of the lava formations while scoping the ocean about 14,700 feet (4,500 meters) below the surface. Milky hydrothermal fluid leaked from parts of the formation, suggesting the lava was still young. Subsequent visits to the site showed that mobile creatures like shrimp and lobsters had begun colonizing the formations, while permanent residents (such as worms) had yet to appear.

In all, it told the story of a very recent volcanic eruption, deeper than any eruption had ever been observed before. This discovery, according to Chadwick, should help flesh out a field of study that's rapidly advancing our knowledge of volcanism on Earth.

"Undersea volcanoes can help inform us about how terrestrial volcanoes work and how they impact ocean chemistry, which can significantly affect local ecosystems," Chadwick said. "It's a special learning opportunity when we're able to find them."