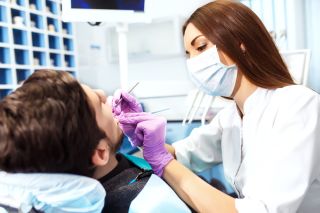 SAN FRANCISCO — As scary as it may sound, a root canal is a fairly routine dental procedure. But for one 60-year-old man, the procedure turned life threatening when he developed meningitis, a swelling of the tissue surrounding his brain and spinal cord. Even more surprising, though, was that this dangerous outcome wasn't due to some ghastly slip of the dentist's drill or a germ-coated dental instrument. Indeed, the procedure went off without a hitch.

But several days after the procedure, the man arrived at an emergency room in New Jersey with a fever, headaches and neck pain. He informed doctors of his recent root canal and also mentioned that his dentist had instructed him to take amoxicillin — a common antibiotic — several days before the procedure.

Because of his symptoms, doctors suspected he had meningitis, which is almost always caused by an infection of some kind. So, they started him on antibiotics, but he only got worse. [27 Oddest Medical Cases]

That's when the doctors treating him suspected he might have drug-induced meningitis, or symptoms of meningitis that are triggered not by an infection, but by a specific drug. And in this case, the drug was amoxicillin.

Such a side effect is very rare, said Dr. Maria Nagori, an infectious-disease doctor at Geisinger Community Medical Center in Scranton, Pennsylvania, who treated the patient in 2017. "It's such an uncommon thing; I'd never heard of it before," said Nagori, who was completing a fellowship at Cooper University Hospital in Camden, New Jersey, at the time of the case.

Indeed, upon further research, Nagori found that only about a dozen cases of amoxicillin-induced meningitis had ever been reported.

Nagori presented the man's case report here on Oct. 4 at IDWeek, a meeting of several organizations focused on infectious diseases. The report has not yet been published in a peer-reviewed journal.

When tests for various infections came back negative, doctors stopped the man's antibiotic treatment, and he started getting better. At a follow-up visit, he was doing well, Nagori told Live Science.

After further questioning, doctors learned that the man had developed meningitis twice before: in 2011 and 2015. Each time, his meningitis symptoms occurred after he took amoxicillin before a dental procedure. But because the man had been treated at several different hospitals, and this is a rare side effect, no one made the connection with amoxicillin until his 2017 treatment.

What's more, the man didn't have any medical condition or risk factors that would have caused him to need antibiotics before a dental procedure like a root canal, Nagori said, meaning the antibiotics were unnecessary.

Nagori and colleagues advised the patient not to take amoxicillin again. Instead, he could take the antibiotic clindamycin.