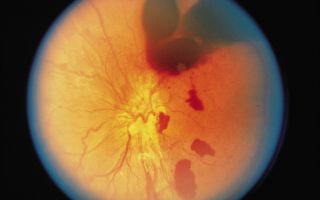 Localized bleeding in the eye from trauma, known as a vitreous hemorrhage, can cause floating spots that obscure vision.
(Image: © American Academy of Opthalmology)

A visit to the chiropractor took a sharp — and unexpected — twist when a 59-year-old woman developed vision problems after her treatment, according to a new report of the woman's case.

The woman had gone to the chiropractor for a neck manipulation intended to treat her headaches. After the visit, however, the woman developed three floating vision spots in her right eye. She described them as tadpole-shaped and continuously visible, according to report.

The first spot appeared in her eye immediately after her visit, and the other two showed up a day later, she told the doctors who examined her. These spots, it turns out, are symptoms of ruptures in the eye's blood vessels, known as preretinal hemorrhages. They were likely caused by a chiropractic technique known as high-velocity, low-amplitude spinal manipulation — a jarring method that involves the application of short, quick thrusts to the back of the patient's neck, the doctors reported. ['Eye' Can't Look: 9 Eyeball Injuries That Will Make You Squirm]

Chiropractic work in the neck area has previously been linked to carotid-artery injuries, according to the repot. The carotid arteries supply blood to the eyes and brain.

But the new case is the first reported evidence of a forceful chiropractic technique affecting the jelly that fills the eye, known as the vitreous humor. High-speed manipulation of her neck may have detached part of the jelly globe from the back of her eye and caused bleeding, creating the floating "tadpoles" in her vision, the doctors reported.

"Within minutes of the neck manipulation" the woman's bleeding began, said case report lead author Dr. Yannis Paulus, an assistant professor with the Department of Ophthalmology and Visual Sciences at the University of Michigan. The timing of when the first spot appeared — as the woman was driving home from her chiropractor appointment — "makes other causes less likely," he said.

"I would speculate that possibly the reverberations of the neck manipulation caused trauma to the vitreous jelly," which in turn caused the vitreous to separate from the retina, Paulus told Live Science. Friction between the woman's detached vitreous and her retina then likely caused bleeding in retinal blood vessels, he said.

Neck manipulation during a chiropractic session can also break up and release arterial plaque — solid buildups in the arteries caused by cholesterol deposits — which can also contribute to eye damage, Dr. Raj Maturi, a clinical spokesperson for the American Academy of Ophthalmology, told Live Science. Maturi, who was not involved in the woman's case, explained that when these fragments of plaque are jarred loose, blood flow can carry them to the eyes, where they may cause microscopic tears.

About two months after the woman's "tadpole" eye spots first appeared, her vision returned to normal without any additional treatment, according to the report.

The findings were published online in the September issue of the American Journal of Ophthalmology Case Reports.

Editor's note: This article was updated at 4:30 p.m. ET to include comments from the case report author, Dr. Yannis Paulus.