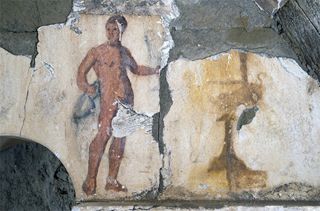 A naked man holding a wine jug and a vase is just one of many figures depicted in a 2,200-year-old mural of a banquet that's decorating a newly discovered tomb in Italy.

The painted tomb — discovered in the ancient city of Cumae — is a prize find. But its style was surprisingly retro at the time it was painted, between the second and third centuries B.C., said the archeologists who found it.

In fact, murals like this one were in vogue about 100 to 200 years earlier, making it quite "unfashionable" for its time, the archaeologists said in a statement. [Photos: Mysterious Ancient Tomb in Amphipolis]

Although a naked servant would be inappropriate (and extremely weird) by today's standards, that wasn't the case when the mural was painted. During that period and the following Roman period, nudity was seen as the natural state of being, according to Haaretz, an Israeli newspaper. For instance, condemned criminals and even female gladiators were known to fight naked in Rome's Colosseum.

The city where the mural was discovered, Cumae, is located about 15 miles (25 kilometers) west of Naples, on the Tyrrhenian Sea. Founded in the second half of the eighth century B.C., it's considered the oldest ancient Greek settlement in the Western world, the archaeologists said.

Since 2001, the archaeologists have focused on an area of Cumae that included a Greek sanctuary, roads and a necropolis. They found hundreds of sepulchers (small, rock-carved rooms holding the deceased), including a series of vaulted burial chambers made of tuff — a volcanic stone native to the area.

The new discovery, found in June 2018 and announced Sept. 25, includes a chamber with three funerary beds. People entered the ancient tomb by using a door in the facade, which was sealed with a large stone block, the archaeologists said.

Tomb raiders pilfered the burials in the 19th century, but the archaeologists managed to find a few remaining traces of funerary artifacts that helped them date the chamber. The lavish space and mural indicate that the people who were buried there had a high social status, the archaeologists said.

The mural itself is unusual for its vast array of colors. The other tombs excavated in the necropolis are decorated murals painted only in red or white, the archaeologists said. But the mural with the naked servant has a number of colors, including brown and pink, painted on top of the white plaster background. Much of the mural has crumbled over the years, but the banquet's guests were likely painted on the side walls of the tomb, the archaeologists said.

To prevent further decay, the archaeologists opted to remove the fresco from the tomb, as well as painted fragments they found on the ground. Later, they plan to reassemble the pieces like a puzzle, they said.