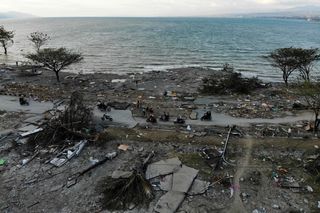 Survivors ride past debris in a devastated area in Palu, in Central Sulawesi, on Oct. 1, 2018, after a 7.5-magnitude earthquake and tsunami hit the area on Sept. 28.
(Image: © Jewel Samad/AFP/Getty Images)

On Friday (Sept. 28), a 7.5-magnitude earthquake hit near Sulawesi, Indonesia. Shortly after, a tsunami with waves of up to 18 feet (5.5 meters) hit the coast, leaving at least 1,200 people dead and dozens missing.

Rescue efforts continue, as people work to dig out the dozens of others thought to be stuck under piles of rubble. The death toll is expected to rise as rescuers reach areas that lost power and communication following the earthquake. [Photos: The Devastating Damage from Indonesia Earthquake and Tsunami]

The city of Palu, which sits at the center of a bay in the northwestern side of Central Sulawesi, was hit the worst and had the greatest number of deaths. From there, a bystander captured a video of the incoming tsunami.

The devastation raised criticism of the country's alert system. Though a tsunami warning was sent out, it was lifted just 34 minutes later, according to Reuters. Some, who had lost power, didn't receive the alerts. Further, the warning underestimated the size of the waves, according to the BBC.

Sutopo Purwo Nugroho, a spokesman for Indonesia's National Disaster Mitigation Agency, told the BBC that the tsunami detector buoys — 21 floating devices connected to deep-sea sensors — weren't working. The detection systems had either been damaged or stolen.

In the hills above Palu, volunteers are working to dig a mass grave, big enough for thousands of bodies, according to the BBC. Among the dead are 34 children who were attending a Bible camp at a church near Palu.

This area of Indonesia has seen about 15 earthquakes with magnitudes larger than 6.5 over the last century, according to the U.S. Geological Survey. The largest, a magnitude 7.9, hit in 1996, about 60 miles (100 kilometers) north of this new earthquake, and resulted in 10 deaths.

Editor’s Note: This story was updated to include the most recent death toll estimates.