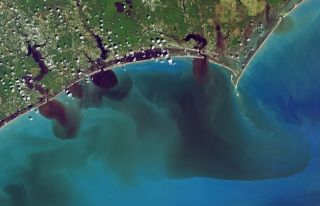 Over 8 trillion gallons of rain fell on North Carolina during Hurricane Florence, according to an unofficial estimate reported by the National Weather Service in Raleigh.

As the floodwaters rose, they churned up pollution and debris, which then was fed into the swollen rivers of North Carolina, a new NASA image reveals. Snapped on Sept. 19 by NASA's Operational Land Imager on the Landsat 8 satellite, this image shows how Hurricane Florence affected water quality: the White Oak River, New River and Adams Creek spew darkened water into an equally discolored Atlantic Ocean. [Hurricane Florence: Photos of a Monster Storm]

The second image combines visible and infrared information to better reveal how much "colored dissolved organic matter" is present in the rivers and the Atlantic, according to the statement.

One type of contaminant, pig waste, can lead to mass fish die-offs and algal blooms, Live Science previously reported. It's not clear if pig waste is part of the contamination shown in the image.

Meanwhile, most of the rivers in North Carolina remain flooded, but water levels in some have begun receding, while some are still rising, according to NASA. Many homes, buildings and roads are still submerged in standing water.