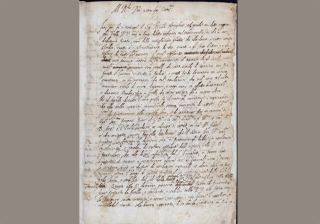 Did Galileo Galilei really say all those terrible things that the Vatican said he did in his famous 1613 letter about a sun-centered solar system — and in saying so, violate church doctrine? Or did the Catholic Church alter his words to make him look bad, so they could more easily declare him a heretic? A long-lost letter that recently emerged from a library archive in the United Kingdom may finally put this question to rest.

The discovery sheds light on claims that Galileo made when he came under fire for suggesting that the church stick to religion and stay out of science, the journal Nature recently reported.

According to Galileo, when Inquisition officials presented a copy of his letter as evidence of heresy, the words had been changed to make them seem more inflammatory. Galileo even produced another copy of the letter with much less incendiary language, to prove that he was being railroaded. [Science and the Catholic Church: A Turbulent History]

But the newly discovered document tells a different story.

Discovered in the Royal Society library by a visiting historian from Italy in August, the newfound letter had languished for centuries after being filed under the wrong date, according to Nature. It appears to be an original draft of the letter, which Galileo originally sent to his friend Benedetto Castelli in 1613, and it's signed with "G.G." — Galileo's initials.

In the letter, Galileo condemned the Catholic Church's interpretations of astronomy; those arguments were used against him when the Inquisition brought him to trial — and convicted him — in 1633.

The new document contains numerous corrections in an attempt to take the edge off language that might be considered heretical, Nature reported. Words that Galileo first put to paper that were harshly critical of the church were later crossed out and corrected, suggesting that he self-edited to make his pronouncements less offensive to the church's eyes, according to Nature.

For example, one passage referred to certain biblical claims as "false"; the description was later crossed out and amended to read "look different from the truth."

If the document is what it appears to be, Galileo's original word choices were far more objectionable than the version that was sent to the Vatican. Nevertheless, Galileo asserted that the letter used by the Inquisition only sounded as critical as it did because church officials changed his words; he claimed that their document was a "fraud" circulated "under the cloak of zeal and charity," in a 1615 letter to a friend and cleric named Piero Dini.

A description and interpretation of the letter will be published in the Royal Society journal Notes and Records, Nature reported.