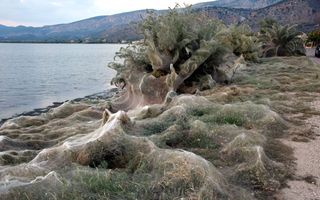 Residents of Aitoliko woke up to an eerie surprise: the beaches were overtaken by these spider webs.
(Image: © Courtesy of Agrinionews.gr)

The tranquil beaches of Greece are an ideal destination for a summer fling, especially if you are a hungry, web-flinging spider. Residents of Aitoliko, an island village perched between two bridges in western Greece, recently woke up to see their local beaches overtaken by such amorous arachnid action — and the results are far more Halloween than Valentine's Day.

In an eerie video posted yesterday (Sept. 18) by YouTube user Giannis Giannakopoulos, you can see the strange fruits of the Grecian spider love-fest take the form of a massive, 1,000-foot-long (300 meters) network of webs stretched over the coast. Shrubs shrug under the net of silk. Palm fronds hang tangled in an unstoppable bad hair day. And, below it all, pairs of spiders are busy building, eating and, of course, reproducing.

Greek news website Newsit.gr asked a biology expert to weigh in on this web of intrigue — and it turns out, it's not as unusual as it seems. According to Maria Chatzaki, an associate professor in the Department of Molecular Biology and Genetics at the Democritus University of Thrace, it's a seasonal occurrence. [Goliath Birdeater: Images of a Colossal Spider]

"The phenomenon we observed in Aitoliko is not unprecedented," Chatzaki told Newsit in an interview (translated from Greek). "It is a seasonal phenomenon that occurs mainly at the end of the summer and early autumn, and is caused by the spiders of the genus Tetragnatha."

Tetragnatha spiders are sometimes called "stretch spiders" for their long, ovular bodies. They live all over the world near watery habitats and are prolific web builders. These webs, which were also tweeted out by Agrinionews.gr,  are good not just for capturing prey like flies and mosquitoes, but also for nesting.

It's a spectacle that's fleeting, beautiful and sort of gross … Such is the nature of summer flings."There are huge numbers of male and female spiders mating [under these webs]," Chatzaki told Newsit. "Obviously, it results from favorable conditions that have made it possible to create this overpopulation."

The warm temperatures and high humidity of coastal Greece help create strong mating conditions for the spiders, as does an abundance of prey in the form of mosquitoes, Chatzaki said. The amorous spiders of Aitoliko will likely continue mating long enough to secure the next generation and then die off without causing any lasting damage to humans or the environment.