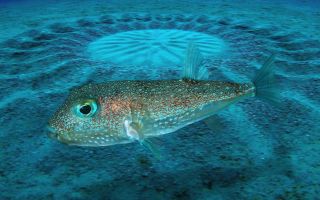 How hard would you work in order to impress your love interest? Would you be willing to spend seven days, 24 hours each day, sculpting a complex but ultimately ephemeral design into the sandy seafloor by wiggling your arms?

Male Japanese pufferfish in the Torquigener genus accept this challenge when it's time for them to find a mate — and they do so by demonstrating their artistic side. A male pufferfish will spend days spinning its fins to create dozens of meticulously aligned ridges and valleys that radiate outward from the center; a successful pattern is both intricate and precise enough to capture a female pufferfish's discerning eye.

A video of a pufferfish's ardent, sand-roiling efforts recently gathered tens of thousands of views when it appeared on Reddit; the footage originally aired in 2014 on BBC Earth, in the "Courtship" episode of the nature documentary series "Life Story," and BBC Earth shared the clip on Facebook in August. [Photos: Pufferfish Make Seafloor Circles to Mate]

Once the pufferfish begins shaping his design, he can't stop to rest. If he did, the ocean current would erase all of his hard work by the time he was finished, so he keeps plugging away until his creation is complete, according to episode narrator Sir David Attenborough.

The clip shows a determined male fish repeatedly sinking his body into the sandy ocean floor and churning his fins wildly, excavating a series of trenches in varying lengths as he pushes his body forward through the sand.

Dense sand clouds emerge as he works, but so does a complex pattern. The interconnected paths ultimately come together as a circular design many times the size of the fish's body; pufferfish measure about 5 inches (12 centimeters) long, and their sculptures can reach about 7 feet (2 meters) in diameter, Live Science previously reported.

In the video, as the "artist" comes across shells that interrupt his design, he lifts them out of the way with his mouth. But they aren't thrown away. Rather, the fish saves them as a finishing touch, placing them carefully atop the ridges in his masterpiece, which is nothing short of astounding in its symmetry and geometric perfection.

Divers first spotted examples of pufferfish sand art on the seafloor in waters near Japan in 1995, but more than a decade elapsed before anyone was able to identify the formations' enigmatic creators, researchers reported in 2013.

In that study, scientists explained that female pufferfish use the intricate structure as a nest; they lay their eggs in the center, where the finest grains of sand collected. In fact, the male's construction technique sweeps fine sand grains into the heart of the design, while the valleys and ridges of the structure slow the flow of water toward the center by about 25 percent, protecting the eggs that rest there.

Unlike males of other species that rely on their size, color or extravagant appendages to attract a female's attention, the male pufferfish has only one thing acting in his favor: the intricacy and impressiveness of the sand structure that he builds, Attenborough explained in the video.

"If this doesn't get him noticed, nothing will," Attenborough said.

A preview of the "Courtship" episode is available to view on the BBC Earth website, and the entire "Life Story" series can be streamed on Netflix.