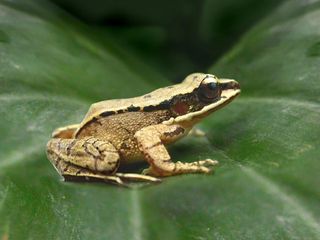 A rare Chinese frog can easily talk behind other animals' backs.

Their ultrasonic croaks slice through the sound of a noisy environment without being heard by potential predators, a new study reveals. It's the first time a non-mammalian animal has been found capable of communicating in the ultrasonic range.

This study, detailed in the March 16 issue of the journal Nature, indicates that these frogs not only hear ultrahigh frequency sounds, but respond to them as well.

Concave-eared torrent frogs, Amolops tormotus, live in forested mountain areas and spend most of their time near streams. The Tau Hua Creek in the Huangshan Hot Springs in China is usually quiet and shallow. But when it rains, waters several feet deep roar through the boulder-filled stream, making it hard for little frog chirps to pierce the din.

"If the frogs want to communicate, they have two options," said Albert Feng of the University of Illinois at Urbana-Champaign. "One is to produce very intense calls. The other is to shift frequency away from the background noise."

Producing extra-loud calls is like trying to shout for long periods of time—it consumes a lot of energy and is difficult to maintain. It also broadcasts the frog's location to potential predators.

So torrent frogs evolved the ability to both produce and hear ultrasonic sounds, which most animals cannot pick up on.

For most amphibians, reptiles, and birds, the upper frequency limit for hearing sits around 12 kilohertz. Torrent frogs, however, have been recorded chirping at 128 kHz—way above the 20 kHz at which most humans tap out.

The key to hearing the sounds is these frogs' special ear configuration.

Most frogs have thick eardrums close to the surface of their skin. But torrent frogs have extremely thin eardrums recessed in their ears. Being recessed prevents the eardrums from tearing on twigs and brush. It also allows for the ear bones that connect the drum to sound processing part of the ear to be shorter and lighter.

This assembly is similar in structure to the tweeter speakers in your stereo, and is prime for hearing ultrahigh-frequency sounds.

The researchers set up a speaker that played both audible and ultrasonic torrent frog croaks and tested how eight males responded to the calls.

Five of the males produced more croaks to both audible and ultrasonic calls than they'd normally belt out spontaneously. One croaked 18 times in response to the test. Three showed no increased response.

"They usually respond by producing calls and approaching the speaker, presumably to ward of an intruder," Feng told LiveScience. "But, of course, a frog cannot do that."

The experiment also raised the question of whether frogs might use ultrasonics for echolocation, the method bats and dolphins use to find their way around.

These frogs ably find tiny branches to perch on in the dark, and they found their way back to the exact spot where researchers had set up a speaker 10 minutes earlier.

"That's remarkable because this place is pitch black," Feng said. "We really have no idea as to how they find their way back. Whether it's by echolocation, smell, or a map in their head, it's incredible."