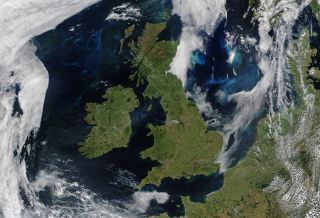 Parts of Britain are a lot more like France than ever before realized.

In fact, Cornwall and south Devon on the British mainland are basically part of France — at least, geologically speaking. New research finds that these areas all derive from an ancient bit of continental crust called Armorica. Previously, the British mainland was thought to have been formed from only a piece of crust called Avolonia and a segment of the precursor to North America, Laurentia. The new research suggests that it was instead a three-way merger.

Understanding this process requires going back 400 million years ago, well before the formation of the famous supercontinent Pangea, which formed around 300 million years ago. It was the early Paleozoic, and most of the above-sea-level crust on Earth was divided into several continents, the largest being Gondwana, which contained the continental crust that would become the modern southern-hemisphere continents. The others were Avalonia (the precursor to Canada and much of Europe), Laurentia (the precursor to North America), Barentsia, Baltica, Siberia and North and South China. [Photo Timeline: How the Earth Formed]

Around 400 million years ago, Avalonia scrunched into a piece of Laurentia. This merger was previously thought to have created the land that would later merge into Pangea and then break up again into the modern-day British mainland.

However, a new study published Sept. 14 in the journal Nature Communications finds that there was another fragment involved in this ancient dance: Armorica. Like Avalonia, Armorica was a fragment of crust that had torn off Gondwana and was wandering toward Laurentia.

Today, the land that was once Armorica is part of France and mainland Europe.

"It has always been presumed that the border of Avalonia and Armorica was beneath what would seem to be the natural boundary of the English Channel," study co-author Arjan Dijkstra, a lecturer in igneous petrology at the University of Plymouth, said in a statement.

But it's not, Dijkstra and his co-author Callum Hatch, now a geological specimen preparatory at the Natural History Museum in London, discovered. Instead, the line runs through Devon and Cornwall.

The researchers discovered this geological boundary by studying ancient magmas called lamprophyres and potassic lavas from 22 different sites in southwest Britain. They examined atomic variations, or isotopes, of the elements neodymium and strontium in the rock samples.

They found two very different variants of rock north and south of an imaginary line through Devon and Cornwall. In particular, the rocks south of the boundary were rich in radiogenic strontium and showed differences in their levels of neodymium isotopes compared with the rocks north of the boundary. The southern rocks precisely matched lamprophyres of the same age found in Europe, on what was once Armorica.

The results might explain why southwestern Britain is rich in the metals tin and tungsten, the researchers said. Tin and tungsten are also common in Brittany in the northwest of France, but not in the rest of Britain.

"We always knew that around 10,000 years ago you would have been able to walk from England to France,” Dijkstra said in the statement. "But our findings show that millions of years before that, the bonds between the two countries would have been even stronger."