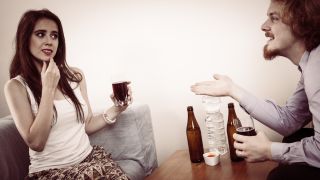 How well do you know yourself? New research suggests that people are pretty good at knowing how they're acting, with one exception: whether they're being jerks.

According to a study posted on the psychology preprint server PsyArXiv, people are relatively accurate judges, moment to moment, of whether they're acting outgoing or shy. They're also good judges of whether their behavior is conscientious and reliable or a bit more haphazard. But people aren't quite as good at gauging whether they're being rude.

"There might be some biases that prevent people from recognizing their own agreeable behaviors or disagreeable behaviors," said study co-author Jessie Sun, a graduate student in psychology at the University of California, Davis. [Understanding the 10 Most Destructive Human Behaviors]

Most previous studies on how well people know themselves have been done on long-term personality traits, Sun told Live Science. But Sun and her graduate adviser, Simine Vazire of UC Davis, wanted to probe how well people understand how they're acting from one moment to the next.

Finding out took a Herculean effort and nine years of work. The researchers asked college students to spend time wearing audio recorders that would automatically activate every 9.5 minutes between 7 a.m. and 2 a.m. to record 30 seconds of audio each. These participants would then be emailed or texted surveys four times a day asking them to recall how extraverted, agreeable, conscientious or neurotic (a measurement of their level of worry) they were during a particular hour of the day.

Though the researchers collected data for more than 400 participants over several years, the current study used data from 248 participants, all of whom answered questions about their day-by-day traits for two weeks and wore the audio device for one of those weeks. It took five years just to transcribe audio and get outsider observers to rate behavior for the first year's data, Sun said.

Participants' ratings of their own behaviors agreed with outside observers for extraversion, or how outgoing they were being, and for conscientiousness, or how reliable and responsible they were being.

But the agreement between participants and outside observers was much smaller for neuroticism and for agreeableness.

Some of this could be because the outside observers had only audio to go on, and they couldn't read cues like body language, Sun said. But there are probably a couple of other reasons to consider, she said. Neuroticism isn't necessarily an obvious trait — a person can be anxious and worried on the inside without showing it on the outside. Thus, she and Vazire suspect that participants were accurate in rating their own level of neuroticism, but that trait was invisible to outside observers.

Agreeableness, on the other hand, is not so hidden.

"People should be able to hear when a participant is being kind versus being rude," Sun said. The weak agreement between how participants thought they were acting and what observers heard could be because people get defensive about whether they're a jerk and would rather deny it. On the other hand, Sun said, mistakes went both ways: Some participants thought they were being rude when observers rated them as kind and polite. Those people might be particularly agreeable sorts who hold themselves to impossibly high standards in daily interactions, Sun suggested.

It might be interesting in the future to find out what kinds of people make which kinds of mistakes about their self-awareness, Sun said. The findings are also important for psychology researchers, who often rely on self-reports in their studies.

"We can trust these measurements for extraversion and conscientiousness, and probably neuroticism," she said, "but maybe not agreeableness."

Another question, Sun said, is whether people can be prompted to recognize their behavior from moment to moment and hour to hour, and perhaps to reflect upon it. If you act like a jerk, she said, it's usually useful to recognize your mistake quickly so you can make apologies. That's why understanding one's short-term behavior — not just one's overall personality — is important, she said.

"It's a more useful form of self-knowledge than knowing that, in general, you're a jerk," Sun said.

The research is under review in a peer-reviewed journal.