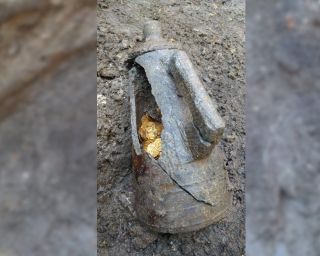 The coins were found hidden inside an amphora, which is a jar used by the Romans for storing liquids such as wine and olive oil.
(Image: © Photo courtesy Italian Ministry for Cultural Heritage and Activities)

About 300 gold coins, dating back around 1,500 years to a time when part of the Roman Empire was collapsing, have been discovered during construction at an abandoned cinema in Como, in northern Italy, the Italian Ministry of Cultural Heritage and Activities said in a series of statements.

All of the coins were found inside the remains of an amphora, a type of storage jar that the Romans often used to transport liquids such as wine and olive oil. After the cinema construction crew discovered the hoard, a team of archaeologists from the ministry excavated the coins and brought them to a lab in Milan, where they are in the process of being examined and conserved said the ministry in one of the Italian language statements.

Coin hoards have been found at many sites throughout the ancient Mediterranean, including a 1,500-year-old hoard found at the Greek city of Corinth. However, hoards containing an abundance of gold coins are rare, and the ministry called the new find an "extraordinary discovery" in one of the statements.

The discovery leaves archaeologists with several mysteries. For example, when, exactly, was the hoard deposited, and who deposited it? Why was it abandoned, and why did no one come back for it?

Historical records indicate that part of the Roman Empire was collapsing around 1,500 years ago, with many wars being fought in Italy.

The Eastern Roman Empire (sometimes called the Byzantine Empire by modern-day historians) regained much of Italy during a series of military campaigns during the rule of Justinian I (who reigned from A.D. 527 to 565). But his successors couldn't hold on to it, and a group called the Lombards gradually took over Italy in the time after Justinian's death, in 565. Additionally, the ancient world was ravaged by the plague, which started in A.D. 541 and killed millions of people.

Whether the deposit of the hoard has anything to do with the chaos that was engulfing the Roman Empire around 1,500 years ago is unclear, but current research may eventually provide answers.