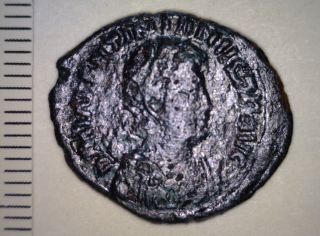 One of the coins found in the hoard was minted in the city of Antioch sometime between A.D. 378-383 at a time when Valentinian II was emperor of the Roman Empire.
(Image: © Michael Ierardi)

A hoard of about 119 coins, together with an iron lock that may have sealed them within a container, have been found inside a collapsed building in the harbor of the ancient city of Corinth in Greece.

The discovery leaves archaeologists with a mystery: Why didn't anyone come to retrieve the stash after the building collapsed?

"That is an excellent question and one that has been troubling us," said Paul Scotton, a professor of classics at California State University Long Beach who leads excavations for the Lechaion Harbor and Settlement Land Project. "The coins were found circa 30-40 centimeters [12 to 16 inches] below modern ground level under the collapsed tile roof. With it having been so close to the surface, why someone didn't return for it is a puzzle. Either the owner could not or did not want to retrieve it. Exactly why that would be is only conjecture," Scotton said. [The 25 Most Mysterious Archaeological Finds on Earth]

Corinth flourishedfor millennia in ancient and medieval times, and today a city named after Corinth is located not far from the ruins of the ancient site. Lechaion is the harbor area of Corinth.

The coins, many of which are made of bronze, were discovered in excavations carried out in 2016 and 2017; some of the coins still need to be cleaned. No human remains were found with the coins, archaeologists said.

The collapsed building is located beside the remains of what may be a work yard, which has the remains of iron slag, unworked iron, cooked animal bone and a concrete basin, archaeologists found.

The earliest coin in the hoard dates to shortly after the death of Roman Emperor Constantine the Great (who reigned from A.D. 306-337), while the most recent two coins in the stash date to the reign of Byzantine Emperor Anastasius I (who reigned from A.D. 491-518), said Michael Ierardi, a professor of classics at Bridgewater State University in Massachusetts, who is studying the hoard. Based on their weight and size, the coins likely date to sometime between A.D. 491 and 498, before Anastasius I reformed the Byzantine Empire's coinage system, Ierardi said.

Research into the hoard is ongoing. The Lechaion Harbor and Settlement Land Project, co-directed by Constantinos Kissas, is a cooperative effort between the American School of Classical Studies at Athens and the Corinthian Ephorate of Antiquities. That cooperative is working with a team of scholars and students from several universities.

A group of scholars with the project presented a paper on this discovery and others from the Lechaion in January at the joint annual meeting of the Archaeological Institute of America and the Society for Classical Studies held in Boston.