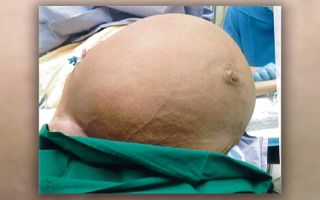 Doctors in Singapore successfully removed a so-called giant uterine fibroid weighing about 61 lbs. (28 kilograms) from a 53-year-old woman's abdomen, according to a new report of the case.

Medically speaking, a fibroid earns the descriptor "giant" when it weighs in at 25 lbs. (11 kg). In the woman's case, however, the mass tipped the scales at more than double that weight.

Fibroids, or "uterine leiomyomas," are a type of benign, or noncancerous, tumor of the uterus. They may be as small as a seed or grow so big that they form a bulky mass that can distort and enlarge the uterus, according to the Mayo Clinic. In most cases, fibroids don't cause symptoms, the Cleveland Clinic says, but symptoms such as excessive bleeding during menstruation, pain during intercourse, frequent urination or a feeling of fullness in the lower abdomen can occur. [27 Oddest Medical Cases]

The woman in this case sought medical attention because the fibroid's weight had made it difficult for her to move around, leaving her largely bedridden, said case report lead author Dr. Poh Ting Lim, an OB-GYN resident at KK Women's and Children's Hospital in Singapore. The woman also experienced some shortness of breath, both when she moved and when she lay down, said Lim, who treated the woman.

To remove the fibroid, doctors performed a total abdominal hysterectomy, an operation that also removed the woman's uterus and ovaries, according to the case report, which was published online Sept. 4 in the journal BMJ Case Reports.

All told, the fibroid was about the size of a large squash, measuring about 26 inches (65 centimeters) across as its widest point, Lim told Live Science. It took up the woman's entire abdominal and pelvic cavity, extending up to the very bottom of her breastbone, Lim said.

The surgery to remove such a massive tumor was challenging, the report said. After the fibroid's removal, doctors had to perform plastic surgery to reconstruct the woman's abdominal wall, which had thinned after being so distended, according to the report.

How does a fibroid get so big?

Fibroids actually occur commonly in women of reproductive age. About 70 percent of women develop these growths by the time they reach age 50, Lim said. But giant fibroids, like the one described in this case, are extremely rare, because women usually have the growths removed before they reach such large sizes, Lim noted.

Fibroids generally grow slowly, at a rate of around 9 percent, on average, over a six-month period during a woman's reproductive years, Lim said. Then, after menopause, the tumors tend to shrink. (The woman in this case was postmenopausal.)

It's unclear exactly how long the fibroid was present in the woman's body. But the growth likely had been there for at least five years, because it takes time to grow to a massive size, Lim said.

Interestingly, the woman did not have any bowel difficulties, such as constipation, and she could eat well despite the fibroid's size (large fibroids may cause abdominal discomfort if they put pressure on surrounding organs), Lim said. The woman may have avoided these symptoms due to the slow growth of the fibroid, which allowed her body time to adjust to the changes, Lim noted.

The woman may have neglected seeking medical attention for the giant fibroid sooner because she was afraid of surgery, Lim said.

When Lim last saw the woman, two months after the surgery, the patient was in good health and her abdomen was healing well.