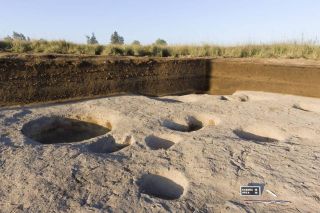 This newly discovered village, discovered on the Nile Delta, dates back almost 7,000 years. The remains of storage silos and the foundations of buildings can be seen in this photo.
(Image: © Courtesy Egypt's Ministry of Antiquities)

An Egyptian village that dates back nearly 7,000 years, long before the first pharaohs rose to power, has been discovered on the Nile Delta.

It's one of the oldest villages discovered so far on the Nile Delta and will provide clues about how agriculture developed in Egypt, said the French-Egyptian archaeological team that discovered the village, in a statement released by the Egyptian Ministry of Antiquities.

Located in Tell el-Samara, an archaeological site about 87 miles (140 kilometers) north of Cairo, the village predates the invention of hieroglyphic writing (which did not happen until around 5,200 years ago) and the construction of the Giza pyramids (which happened around 4,500 years ago). It's not certain when Egypt was first unified, or which pharaoh unified it, but it happened by 5,200 years ago. [In Photos: Looking Inside the Great Pyramid of Giza]

The archaeologists discovered the remains of several buildings as well as numerous storage silos in the village. The silos contain a vast amount of animal bones and plant remains, Frederic Gio, the leader of the French-Egyptian team, said in the statement.

They are currently analyzing those animal bones and plants to figure out what they are and when, precisely, they date to, the archaeologists said. This information will provide clues about when and how agriculture was developed and spread throughout Egypt, Nadia Kader, head of the ministry's Central Department of Egyptian and Greco-Roman Monuments of Lower Egypt, Sinai and the Northern Coast, said in the statement.

The team is also analyzing the remains of pottery and stone tools found in the village.

The village appears to have been inhabited a long time, possibly until around 5,000 years ago, the archaeologists said. Further excavations and analysis may reveal more information on how long the village was in use and how it changed over time. Why the village was abandoned is also a mystery.

Agriculture appeared in Mesopotamia more than 10,000 years ago and was being used in the area that is now Israel (which borders Egypt) 7,000 years ago.