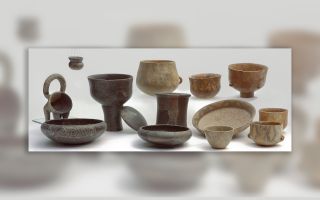 About 7,200 years ago, farmers living near the Adriatic Sea packed clay pots full of soft cheese. And thousands of years later, archaeologists found traces of this fermented, cheesy goodness, preserved in chemical signatures left behind in the vessels.

This new evidence, found at two sites in what is now Croatia, dates to 5200 B.C. and pushes back cheese production in the Mediterranean by more than 2,000 years, scientists reported in a new study.

Cheese making was likely a game changer for early farmers; it may have helped lactose-intolerant adults ease into eating dairy, as fermentation reduces dairy's lactose content, the researchers wrote. And as a portable, preserved food, cheese would have been a dependable source of nutrition as farmers moved from the Mediterranean into Europe, an expansion that began around 7000 B.C. and lasted about 3,000 years, according to the study. [The 7 Perfect Survival Foods]

The Balkan Peninsula is considered to be the gateway for the spread of farming to northern Europe, lead study author Sarah McClure, an associate professor of anthropology with Pennsylvania State University's Department of Anthropology, told Live Science. Finding evidence that cheese production was taking hold alongside changes in farmers' settlement patterns, suggested a connection between cheese and human migration, McClure explained

Archaeological artifacts are often washed during preparation, and this process can destroy or damage residues that hint at how ceramic pots may have been used, McClure said. Fortunately, excavators preparing the sites' pottery decided to keep 10 percent of the pieces unwashed — a choice that preserved the precious lipids that pointed to cheese production thousands of years ago.

"Residue analysis is relatively new in archaeology. People have been doing it for, maybe, 10 years," McClure said.

"Now that the fieldwork methods are catching up with the lab-work methods, we're seeing that we should be preserving at least a subsample without washing — now that we know we can get better data from residues," she said.

"I'd imagine it [was] sort of a fresh, firm cheese," McClure said, "not as squishy as a ricotta, with a little more heft to it — like a farmer's cheese or perhaps like a feta."

People in the Mediterranean have been drinking milk for at least 9,000 years, researchers have determined based on remnants of dairy found on 500 pieces of prehistoric pottery from across the Mediterranean. And the earliest cheese-making evidence dates to about 7,500 years ago, discovered in 24 pottery fragments collected in Poland.

In some cases, actual pieces of ancient cheeses have survived to the present. In 2014, researchers reported finding yellowed hunks of preserved cheese wrapped around the necks of 3,800-year-old mummies in China; the cheese was likely buried with the corpses as a snack for the afterlife.

Another piece of ancient cheese, described by researchers as a "solidified, whitish mass," was recently found in an Egyptian tomb dating back 3,000 years, Live Science previously reported. But you wouldn't want to taste this cheese; molecular evidence in the cheese hints that it may have been infected with Brucella bacteria, which transmit the nasty gastrointestinal illness brucellosis.

The new findings were published online today (Sept. 5) in the journal PLOS ONE.