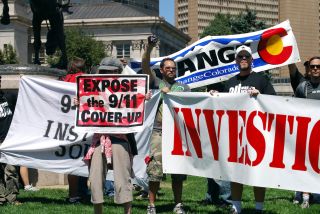 When something occurs that's hard to explain, many people say that "everything happens for a reason" and that the event was "meant to be."

The thought provides a purpose for what, in reality, was a random, accidental event.

This type of thinking, called teleological thinking, is what gives rise to creationism, which, in this case, refers to the belief that Earth was created by an all-powerful being less than 10,000 years ago. That same kind of reasoning also promotes a belief in conspiracy theories, a new study has found.

"I think the study is a valuable and interesting contribution to work on the ways that our gut intuitions can promote particular non-scientific world views," said Deborah Kelemen, a developmental cognitive scientist at Boston University, who was not involved in the study.

In previous research, lead study author Pascal Wagner-Egger, a social psychologist at the University of Fribourg, and his colleagues found that people who believe in conspiracy theories don’t entirely reject the fact that accidents or random events occur.

Wagner-Egger and his colleagues were perplexed by the fact that belief in conspiracy theories wasn't associated with a complete rejection of random events. They suspected it might be because of a teleological bias, or predisposed way of thinking that also leads to a belief in creationism. [Creationism vs. Evolution: 6 Big Battles]

Teleology describes a way of thinking that rejects scientific reasoning but instead readily accepts that events occur because of the purpose they serve.

For example, believing that "the sun rises every day in order to provide daylight," is a teleological thought, which is in opposition to the scientific fact that the sun rises because Earth rotates on its axis every 24 hours. (In Voltaire's satirical novel "Candide," the character Dr. Pangloss takes this type of thinking to its absurd logical conclusions, by arguing that spectacles fit noses because God created noses to fit spectacles.) Teleological thinking is common in childhood, but for many people, it persists into adulthood.

The researchers found no relationship between conspiracism or teleological bias and age, gender, religion or political orientation. But they did find a link with education level. "It is a common finding that the people who are less educated believe more in conspiracy theory," Wagner-Egger said.

It's a matter of not only education but also social status, Wagner-Egger added. Previous research has found that "minority groups and people in the fringe of society believe more in conspiracies because [they're] not in the system," or tied to sources of authority, he said. As a result, they are more inclined to think that leaders and governments are hiding things from them.

Wagner-Egger said it's not bad to think critically about information from sources of authority, but conspiracists take it too far and focus only on the narrative of a conspiracy, refusing to consider arguments refuting their theories. Conspiracists "are not skeptical in the right way," Wagner-Egger said. "If you reject all [arguments], we cannot discuss anymore, and it's clearly a problem for years to come," he said.

Growing conspiracism could have severe consequences, Wagner-Egger noted, as conspiracy beliefs are linked with things like vaccine rejection and climate change denialism. People should be careful when following old beliefs, "because those beliefs are based on our cognitive biases," he said.

"Cognitive biases — like the teleological bias — develop early and are cross-culturally recurrent," Kelemen said. "Given this, we should probably start intervening earlier if we want to effectively promote scientific literacy and reduce non-scientific mindsets, like conspiracy beliefs, that can promote fear and paranoia."

Wagner-Egger and his colleagues published their results Monday (Aug. 20) in the journal Current Biology.