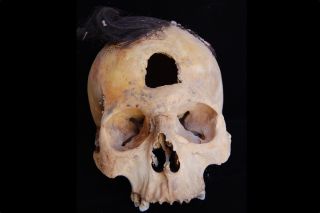 One of six trophy heads found in the 27 funerary pits. The dry climate in southern Peru allowed for the hair of the person to be preserved despite the passage of about 1,500 years.
(Image: © Maria Cecilia Lozada)

The nearly 1,500-year-old remains of at least 60 people and six trophy heads have been discovered in deep pits in Vitor Valley in southern Peru. Due to the arid climate, some of the remains became naturally mummified, their flesh surviving without the need for artificial mummification.

There were 27 pits in total, each dug 10 to 13 feet (3 to 4 meters) into the ground, according to the excavation team. Dating back to around A.D. 550, a time when there was no writing system in Peru, the individuals likely belonged to what modern-day archaeologists call the La Ramada culture, according to Maria Cecilia Lozada, a research associate and lecturer of anthropology at the University of Chicago, who led the excavation team. [Photos: The Amazing Mummies of Peru and Egypt]

People of the La Ramada culture lived in the Vitor Valley and nearby valleys (one of which contains an archaeological site that the culture is named after) and shared similarities in the artifacts and textiles they used and in how they buried their dead. "We see a lot of beautiful and feathered textiles" that seem to be related to that culture, buried with these people, Lozada said.

Each pit contained several bodies, with the babies buried alongside the bodies of adult women, suggesting the babies may have been buried with their mothers, the archaeologists found.

Inside the burial pits, archaeologists also found the trophy heads, which had been cut off from the bodies after death.

Trophy heads have been found at other sites in Peru and may be the heads of enemies killed in battle, archaeologists say. However, Lozada believes that the heads found in these pits are from people who lived in the same community and were killed in an outside battle.

"The heads may not belong to enemies, but maybe to combatants of the same group," Lozada said. Perhaps, comrades brought the heads back from the battlefield so they could be buried with people from their own community. Carrying the whole skeletons back would have been much more work, Lozada suggested, though it's just one theory.

Lozada and other members of her team presented their findings in April at the Society for American Archaeology annual meeting in Washington, D.C. The research will be published in the future in a scientific journal. Excavation of the funerary pits in the Vitor Valley was carried out in 2012 and 2015.