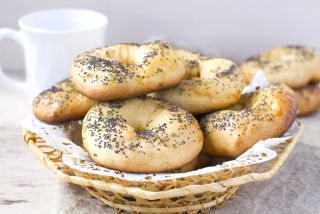 A mother in Maryland said that eating a poppy seed bagel caused her to test positive for opiates while she was giving birth, according to news reports. But how does this happen?

The woman, Elizabeth Eden, ate a poppy seed bagel the morning she gave birth to her daughter in April, according to local news station WBAL. Eden was in labor when her doctor told her she had tested positive for opiates.

"I said, 'Well, can you test me again? And I ate a poppy seed bagel this morning for breakfast,'" Eden told WBAL. But her doctor said the hospital had already reported her to the state.

After her positive test, Eden was assigned a caseworker, and her newborn daughter had to stay in the hospital without Eden for five days, WBAL reported. Eden's caseworker closed the case after realizing it was "a legitimate case of the poppy seed defense," WBAL said. [9 Weird Ways You Can Test Positive for Drugs]

Poppy seeds come from the opium poppy, a plant that produces a milky fluid from which morphine and other opiates are derived. As a result, poppy seeds can contain traces of morphine.

It is possible to test positive for opiates, or morphine, because you consumed poppy seeds, said Dr. Lewis Nelson, chairman of emergency medicine at Rutgers New Jersey Medical School, who was not involved with the case. "It's not very common, but it can happen," Nelson told Live Science.

Whether you get a so-called false-positive drug test from eating poppy seeds depends on a number of things, Nelson said, including how much you ate, the concentration of morphine in the poppy seeds and the cutoff threshold used by a laboratory for a "positive" result.

In a 1987 study, five members of a lab baked cookies containing about 1 teaspoon (5 milliliters) each of a poppy-seed filling that they bought from the grocery store. Two hours after eating several cookies, all of the lab members tested positive for opiates. The concentration of morphine in their urine was greater than 300 nanograms per milliliter (ng/mL), which was the minimum cutoff used by the test.

But it's hard to say exactly how many poppy seeds you'd have to eat to test positive, because the concentration of morphine in poppy seeds can vary quite a lot, Nelson said. In addition, labs use different cutoffs for a "positive" result, and a lower cutoff would be more likely to trigger a positive result, he said. (The amount of morphine in poppy seeds is very small, but in theory, the seeds could produce a "high" if people consume huge amounts of them.)

In fact, in 1998, the U.S. Department of Health and Human Services changed the federal cutoff level for a positive result from 300 ng/mL to 2,000 ng/mL of morphine in order to avoid false-positive results from eating poppy seeds, according to a 2008 review study. However, most labs continue to use lower cutoffs, the review said. (Eden's hospital used a cutoff of 300 ng/mL, WBAL reported.)

But "if you want to prove it's poppy seeds vs. morphine, it's really hard," Nelson said, because both sources would trigger a positive morphine result.

If you are expecting a drug test, it's a good idea to avoid eating poppy seeds beforehand, Nelson said. But he noted that most drug-testing places will ask you beforehand if you've taken anything that might turn up positive on the test.