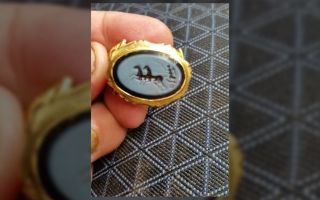 This golden bling dates back to Roman times.
(Image: © Courtesy of Jason Massey)

An amateur historian just unearthed a treasure that would turn any archaeologist green with envy: an ornate gold ring dating back to ancient Roman times.

On the face of the ring — which is thought to be 24-karat gold — ancient artisans placed a black onyx with an engraving of the Roman god of victory driving two horses, the BBC reported.

Jason Massey, a member of the Detecting for Veterans group, discovered the detailed ring on July 29 while surveying a field near the town of Crewkerne, England. [Photos: Mosaic Glass Dishes and Bronze Jugs from Roman England]

The 1.7-ounce (48 grams) ring has yet to be formally analyzed, but experts at the British Museum said the ring likely dates to sometime between A.D. 200 and A.D. 300, the BBC reported.

At first, Massey thought the ring was a gold coin, because he found it in the middle of a stash of 60 ancient Roman coins that were buried in the field, he told the BBC. This site has proved fruitful for Massey; in November, he and his friends found a lead-lined coffin and more than 250 coins that also dated to the time of the Roman Empire, the BBC reported.

These lavish finds indicate that a "very high-status Roman villa" once sat at this site, Massey said.

"There's [a] load of figures floating about [for the value of the ring], but we're interested in the villa, who's lived there and where they've come from and who the person was that wore this ring," Massey said.

According to Ciorstaidh Hayward-Trevarthen, a finds liaison officer in Somerset and Dorset, England, "There are a couple of gold rings of that sort of date from Somerset, but they're not common," she told the BBC.

And, just as it is today, gold is "an indication that the owner is fairly wealthy," Hayward-Trevarthen said.

This ring is far from the only Roman artifact uncovered by amateurs. In 2015, a man with a metal detector discovered an exquisitely preserved Roman-era grave in a village north of London, and in 2013, amateur archaeologists uncovered a massive network of tunnels under the Roman emperor Hadrian's villa, in Tivoli, Italy.