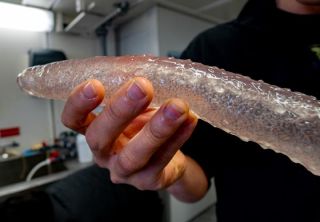 A surprising newcomer is taking over the waters that lie off the Pacific Northwest coast. Gelatinous pink sea pickles first invaded the area in 2014, and now researchers report that these tubular tunicates appear to have fully colonized their new habitat and show no signs of leaving.

Sea pickles (Pyrosoma atlanticum) are a type of pyrosome— a free-floating colony of hundreds of thousands of tiny, multicellular animals called zooids. Each cylindrical colony feeds on phytoplankton by filtering several liters of water per hour. Most species of pyrosomes, including sea pickles, are considered tropical-to-subtropical creatures and are commonly found off the coast of southern California.

But in 2014, fishermen, beachgoers and scientists began noticing the tropical intruders in the cooler waters off the coast of northern California, Oregon and Washington. By the summer of 2017, sea pickles had been observed in unprecedented numbers off the coast of Oregon. That made marine biologists start to wonder if sea pickles had found a permanent new home. [Gallery: Jaw-Dropping Images of Life Under the Sea]

"These animals may be able to survive in colder water than we previously thought possible, but what might really be contributing to their presence is that the food source off our coast is right for them," lead author Kelly Sutherland, a marine biologist at the University of Oregon, said in a statement.

Sutherland and her colleagues documented the sea pickle invasion during multiple research cruises in 2017 and earlier this year off the Pacific Northwest coast. They found that sea pickles like to hang out around 130 feet (40 meters) below the surface, where the temperature is a cool 50 degrees Fahrenheit (10 degrees Celsius). And although individual sea pickle colonies can grow to more than 2 feet long, the ones the researchers found were typically smaller: only 1.5 to 10.2 inches (4 to 26 centimeters) long.

Under the right conditions, sea pickles can form high-density blooms with dozens of individuals per square meter. The blooms can get so large that they're difficult for commercial fishery operations to avoid them. The Pacific Northwest fishing industry struggled in 2017 because of the many sea pickles clogging their nets and the incredible amount of time it took to remove them.

The researchers said these once-tropical sea pickles now appear to be thriving in colder waters, and continued large-scale aggregations of these intruders may force certain fisheries to relocate to avoid having sea pickles obstructing their nets.

The researchers published their study yesterday (July 19) in the journal Ecology.