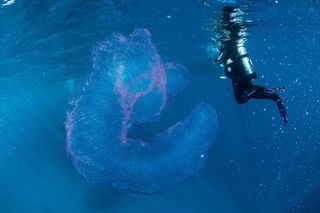 A massive, glowing, Slinky-like "creature" photographed by a scuba diver off the coast of Australia has spurred intense speculation about what the mystery beast could be.

Is it a sea monster of the deep? A giant sea squirt? An enormous, fire-bodied sea worm?

As it turns out, it's none of the above. The translucent, glowing tube that was photographed by Jay Wink, owner and operator of Abc Scuba Diving Port Douglas, off Port Douglas, Queensland, is made up of strings of squid eggs from a little-known species, said Rebecca Helm, a jellyfish biologist at the Woods Hole Oceanographic Institution in Massachusetts.

Speculation swirled that the psychedelic creature was a giant pyrosome, a free-floating sea squirt made of thousands of tiny clones. [13 Weird Things That Washed Up on Beaches]

But if people look closely at the video, they'll see that the mass does not have a solid exterior as those two animal types have, but is instead incredibly transparent, Helm said in an earlier blog post about squid egg cases. The mass looks like it's made of strings of pink pearlescent blobs, like the beaded curtains that often hang in college dorm rooms. Those glowing pink blobs are in fact the squid eggs themselves, Helm said.

Even so, any scuba diver who discovered this "creature" should be excited — seeing such a mass is an ultrarare event, Helm said in the earlier blog post.

"These egg masses are incredibly rare," Helm said in the blog post. "If I were there, I would have been screaming with joy through my regulator. I hope the divers know what a lucky sighting this was."

The mysterious creature that laid these eggs is likely a diamond squid, although that's not definitive, Helm said.

"The species that has been published is Thysanoteuthis rhombus, but it's hard to know for sure," Helm told Live Science in an email. "ID'ing squid eggs is a pretty esoteric art."

The diamond-shaped squid is a large and mysterious creature that can be about 3 feet (1 meter) long and weigh up to 66 lbs. (30 kilograms). The species looks a bit like a kite affixed to a handful of tentacles, and the animals live in male-female pairs for their life span (about one year). The huge sea creatures lay large egg cases up to 6 feet (1.8 m) long, according to a 2006 paper in the Journal of Molluscan Studies. Each egg case can carry between 24,100 and 43,800 eggs, according to a 2002 study in the Journal of Plankton Research.

The fertilized eggs are encased in a gelatinous type of material, and they are usually laid in the open ocean. Once they are released, the eggs are probably on their own, Helm said.

"The eggs basically float in the ocean. It's not likely that the parents visit, though some squid mothers take care of their eggs and hold them in their arms during development," Helm said.

The pinkish glow is the color of the eggs themselves, although it's not clear exactly what gives them this vibrant hue, Helm said. However, past research on diamond-shaped squid larvae that develop from the eggs in the lab revealed that they are studded with lines of both reddish and yellow chromatophores, or pigment-containing cells, according to the Journal of Plankton Research study.

The egg masses are typically found in regions with strong, warm currents, according to that study.