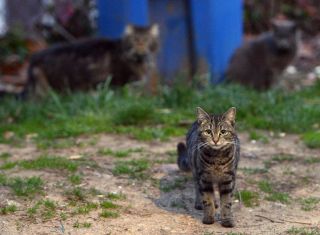 Humans are coming together in Washington, D.C., to get a head count of cats — every furry one of them, including those living in the wild, in shelters and in households.

The project, called "D.C. Cat Count," will take three years and cost $1.5 million, according to NPR. Scientists, animal welfare organizations and citizens will do the tabby tallying, according to the project's website.

Cats, especially feral ones, can have a large impact on nature. For example, a recent study showed that every year, feral cats kill around 466 million reptiles in Australia, some threatened, Live Science previously reported. Another study by the same team and published in 2017 in the journal Biological Conservation showed that these Australian cats also devoured around 272 million birds a year. [Here, Kitty, Kitty: 10 Facts for Cat Lovers]

Though cats' eating habits have conservationists worried, these tiny hunters can also be quite helpful to society by eating rats and other pests, according to The Washington Post. And obviously, they can be beloved pets.

The groups that are managing the cat count — PetSmart Charities, The Humane Society, the Humane Rescue Alliance and the Smithsonian Conservation Biology Institute — are hoping that the project will provide the information needed to better manage the cat populations in the area. Ongoing efforts to manage populations include help with stray-cat adoptions and the neutering or spaying of the cats. However, it remains unclear how effective these efforts are at controlling the population, according to NPR.

The counting will be done through camera traps, household surveys and analyses at shelters. Furthermore, the team hopes to get citizens involved by creating a phone app that people can use to send in photos of cats, according to NPR.