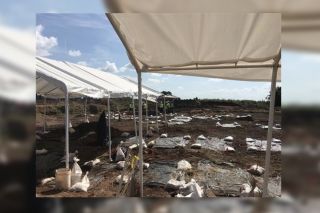 This historic cemetery was discovered during a construction project in Sugar Land, Texas.
(Image: © FBISD)

Ninety-five unmarked graves have been uncovered at a former sugar farm in the suburbs of Houston, Texas.

This week, archaeologists announced that the century-old burials likely belong to African Americans who were forced to work on plantations through the state's convict-leasing system when slavery ended.

"We believe based on land use and the materials that come from the burials that this cemetery dates between 1878 and around 1910," Reign Clark, cultural resources director with Goshawk Environmental Consulting, Inc., said in a statement.

That date range would be consistent with the state's post-Civil War convict-leasing program, which allowed plantation owners, newly deprived of a cheap labor force, to replace their slaves with prisoners. The system was also a way for the state's prison system to get out of housing and feeding their entire inmate population, which grew disproportionately with African American men after the end of slavery, according to the Texas State Historical Association. The convicts leased for hard labor in the sugar plantations often suffered physical abuse and high mortality rates. [Busted: 6 Civil War Myths]

"These were crimes against humanity," activist and historian Reginald Mooretold Live Science. "They had been dehumanized, victimized and tortured, and it was sanctioned by the state."

The Fort Bend Independent School District (FBISD) broke ground on itsfuture technical schoolin Sugar Land, Texas, in November 2017. By April 2018, the school district announced the discovery of the historic cemetery on the site. Clark began leading the excavations a month ago with a team of about a dozen archaeologists.

As of FBISD's announcement on Tuesday (July 17), 48 individuals had been exhumed, and scientists had examined more than 20 of those bodies. [10 Biggest Historical Mysteries That Will Probably Never Be Solved]

"All of them are male, except for one female of the ones that have been analyzed so far," Catrina Whitley, a bioarchaeologist working on the site, said in the statement. "They're ranging from 5 feet, 2 inches to 6 feet, 2 inches in height, and anywhere from 14 years of age to 50 to 70 years of age."

FBISD officials said they will look for an "appropriate location" to rebury the remains excavated from the site.

Moore has been advocating for the state to recognize its past mistreatment of African Americans in the convict-leasing system and to preserve sites related to the memory of these laborers. He is the guardian of the nearby Old Imperial Farm Cemetery, and says he had been warning that the tract set for construction likely contained more graves. Moore was recently able to visit the excavation site and noted that the bones in their wooden coffins were in surprisingly good condition.

"For me to see them out of the graves after advocating for them, and speaking for them, it was an overwhelming moment," Moore told Live Science. "It took my breath away."