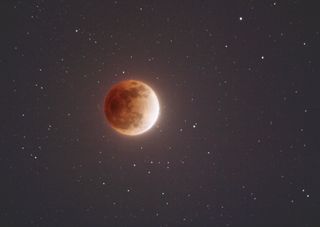 Why are some eclipses longer than others?

The longest lunar eclipse of the 21st century is coming on July 27, with a totality set to last a full hour and 43 minutes over Africa, the Middle East and Central Asia. Nearly 4 hours will pass from the moment Earth's shadow darkens the leading edge of the moon to the moment the moon's full shine returns, according to Earthsky.org.

For comparison, the next lunar eclipse visible from North America, on Jan. 21, 2019, will last just an hour and 2 minutes. The solar eclipse that swept across 14 U.S. states in August 2017 remained in totality for no more than 2 minutes and 40 seconds, according to NASA.

So, what's the reason for these huge disparities between eclipses?

Solar eclipses — when the moon blocks the sun's light from reaching Earth — are always way shorter than lunar eclipses, when our planet moves between the sun and moon. That's because of the differences in the shadows involved, said Kaisa Young, an astronomer at Nicholls State University in Louisiana.

When the moon blocks the sun's shadow from hitting Earth, as happens during a solar eclipse, the umbra — the area of complete shadow, where the sun is totally blocked — is a just a few dozen miles wide and zips across the planet. But Earth's umbra is large, and the moon can take a long time to pass through it — especially if it moves through the middle of the shadow, rather then skirting along the edges, she said.

But there are also significant differences between different solar eclipses and different lunar eclipses, Young said. And that has everything to do with the different patterns and cycles that govern their behavior.

The Earth, moon and sun aren't in perfect alignment, Young explained. The moon's orbit has about a 5-degree inclination, and it only crosses the same plane as the Earth and sun twice in each of its 27-day orbits. This is the basic pattern that governs every eclipse.

About twice every 11 months, those crossings are timed such that the Earth, moon and sun all end up in a line with one another. Each such alignment happens once — with Earth between the moon and the sun (lunar eclipse) — and once with the moon between Earth and the sun (solar eclipse), Young said.

That's why solar and lunar eclipses tend to come in pairs about two weeks apart from one another, and why there tend to be four total eclipses in a normal year, she added.

But not all alignments are created equal, because that 11-month cycle isn't totally regular and stable. Sometimes, the alignment is imperfect, she said, and a shadow just barely crosses part of the Earth or moon. That's what happened on July 13, when the partial solar eclipse twin of the upcoming lunar eclipse glanced across the southern edge of Australia and near-Antarctic waters.

Other times, the alignment is close to exact, and the moon passes through the middle of Earth's shadow, or the moon's shadow passes near Earth's equator. Those eclipses last much longer, Young said.

The final factor impacting the length of an eclipse, she said, is the time of year. In July, Earth reaches the farthest point of its orbit from the sun, and it looks smallest in the sky compared with other times of year. That means that both the Earth and moon cast larger shadows, which take longer to move through. Earth reaches its closest point to the sun in January, so our home star looks especially large in the sky at that time, and the shadows of eclipses are smaller.

This upcoming July 27 eclipse, with the moon passing through the middle of Earth's shadow, will be about as long as they come.